Look at What We Saw at the Air Field 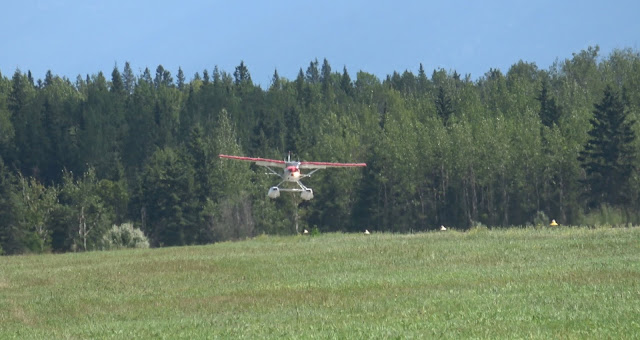 I have mentioned several times in this blog about how we often take Kona on walks up and down the runway at the air field.  It is an excellent place to walk the dog because it is open so you can see all around you, and can spot wildlife or something else that might cause Kona to take off, it is paved so the walking is easy for us, Kona loves to sniff out the weeds and bushes that parallel the tarmac, and there are rarely any planes.

The other day when we were there, halfway down the tarmac, I noticed that one of the lights that run along the sides of the runway was on.  The lights are radio controlled and come on when a plane is in the area.  We listened and scanned the skies but saw or heard nothing, so we continued our walk.  About 10 minutes later we did hear and see a plane in the distance, so we leashed Kona and headed over to walk along the verge of the tarmac.

We watched as the plane flew past on the south, then made a wide arc.  We saw that it had pontoons so we weren’t sure if it was going to land in the Fraser River or the air field.  Then, as it tightened its arc, we saw that it was going the land at the air field.  We were well off the tarmac and watched it come in.  We were surprised at how little runway it needed.  By the time it had landed it was still pretty far away.

We could see the pilot get out and wander around in the staging area.  When we got close, we greeted him and he immediately asked us if the air field had any fuel.  He told us he had flown from Prince George and they had no fuel, so he was anxious to get some so he could continue his flight.

I told him there was fuel available and showed him the phone number he needed to call to get someone over to get him some fuel.  He called and was talking to Kelly, so we figured he was in good hand and so we left.  Wow, an airplane at the air field.