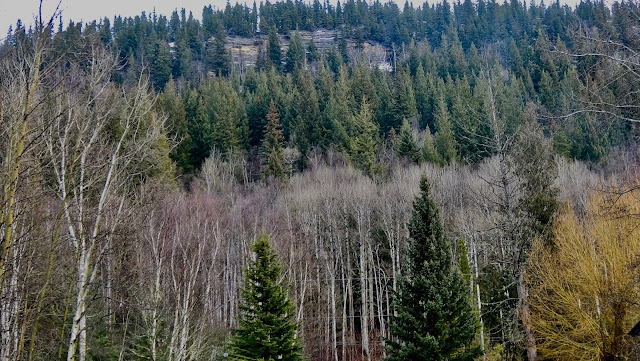 When we bought our house in McBride, it was situated on 5 acres (2 ha.) of land all below the road.  That seemed like enough land to give us a feel of the wild, and the privacy we wanted.  Across the road and sloping above was was 14 acres (5.6 ha) of raw hillside that belonged to a guy named Klaus, who lived in Germany.  There was no house on his land and Klaus rarely came to see his property, so things were fine.
Eventually, Klaus decided to sell his land, and seeing it listed weekly in the real estate ads in the local paper, made us nervous.  What if someone bought it and did something we didn’t like, maybe log it, or make a gravel pit, or something.  This unease eventually made Joan and I buy the land, just so we could keep it natural.  Once we owned it, we just let it be.
I would occasionally hike around through it, and a one point made a trail through it, using mostly the heavily used animal trails that already existed.  When we got a dog, I just quit going over to the land because I didn’t want any scent of mine crossing the road, we didn’t want to give our dog any reason to go up to the road.
Yesterday, since we no longer have a dog, and there is still no snow on the ground, I decided to take a hike up through our fourteen acres, to see what I could see, and hopefully take some photos.  It was basically the same as I remembered it, although it seemed strange to be in the middle of December, and have everything still look like early November.
I saw a lot of photo-worthy subjects and will be blogging about them in the next few days.  Today I thought I would just give you some general shots.  Above, what the land looks like from our house and below, what it looks like when you are walking through it. 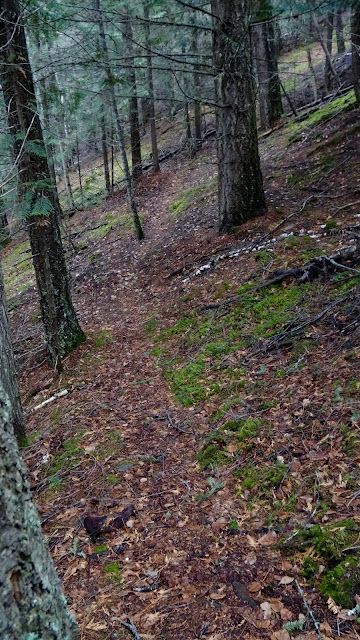