Last night we attended an exhibit of photographs by Bill Clark.  Bill took it upon himself to create a calendar to pay homage to some of the women that have contributed so much to McBride’s social fabric and commerce.  The group included fire fighters, public health contributors, business owners, and other women that have done so much to make our community special.
The photos of the women are in black and white, but some have unexpected color accents, such as on an earring, jewelry, or piece of clothing.  The photos are very crisp, clear, and expressive.
The show took place in the old library building, which is a wonderful venue for such things.  A big crowd turned out, not only to view Bill’s photos of McBride’s Women , but also his beautiful landscapes, that featured both local and land and seascapes.  It was all very impressive.
The calendars are on sale locally for $20, at the Whistlestop Gallery.  Below is a photo of Bill, modestly discussing his work. 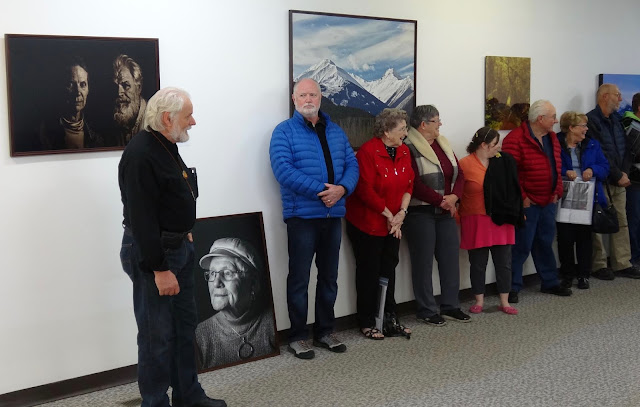 Visit davidmarchant.ca to see my paintings.