Orphaned Kitten on the Carport 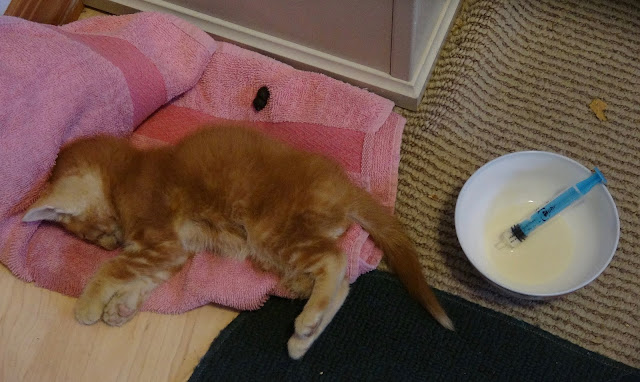 Warning:  This blog does not end well.
This morning when I opened the door to go outside, I heard a strange sound, and noticed a reddish brown ball of fur curled up beside my rubber boots.  From the way it was lying, I couldn’t really figure out what it was.  When I knelt down to take a closer look, I discovered it was a very young kitten.  It was constantly giving a distressed “mew”.
I called to Joan, who was then also thrown into a state of distress.  She warmed up some soy milk and we used a hypodermic to squeeze the liquid into the kitten.  The poor little kitten wasn’t able to keep much in its mouth, but every thirty minutes we tried again.  Joan made some phone calls and did some  internet searches to see what we could do to help the kitten.
Sadly about three hours after we had discovered it, I found it was lifeless lying on the towel.
The whole episode is a mystery; I don’t know where the kitten came from, how it found its way to our carport (our house is pretty far away from our neighbors),  There used to be a reddish cat in the neighborhood, but we haven’t seen it for several months.  I don’t know.
This thing does make us shake our heads and wish people were more responsible for their pets and have them fixed and look after them better.
I wish I could have told you a tale that had a happier ending, but it is what it is.