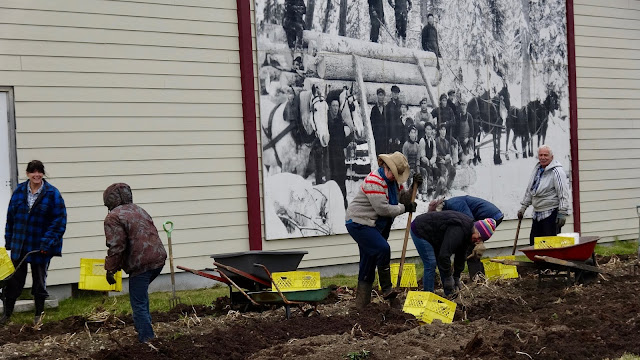 After several delays due to weather, members of McBride’s Community Forest bundled up and finally were able to dig the potatoes.  There was a cold wind and even a few snow flakes that floated down from the sky, but we got the potatoes dug, washed, dried, and despite the impromptu dig, we got the word out and sold some.  The crop is a fund raiser for the Community Garden.
This wasn’t the best year for potatoes due to the dry summer and thick smoke that blocked out the Sun for weeks, and the potatoes were not as prolific as past years and on the small side, but I’m sure they will be tasty and some will no doubt get eaten during the Canadian Thanksgiving dinners that will occur over today and tomorrow.

You can see my paintings:  davidmarchant.ca