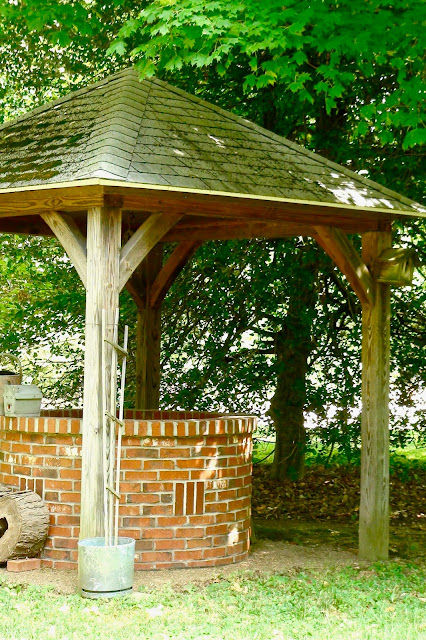 For some unknown reason, yesterday I started thinking about my childhood and the well on my grandparents’ farm.  Their well was a fascination to us kids.  We were constantly being told about the danger it posed, but at the same time we were rewarded with a cold metal cup of water from it, on those hot summer days.
It was the process of getting that drink of water that was so interesting to us.  There was a pulley suspended from the roofed structure that sheltered the well, and hanging from both sides of that pulley, down into the darkness of the well was a long chain, with a metal bucket on each end.
To get water, an adult would pull on one side of the chain, which lowered one of the buckets down until we could hear a splash.  Then the other side of the chain was pulled, hand over hand, until the bucket of fresh cold water was raised up to the top of the brick wall that surrounded the well.  The chain would be secured with a hook, so that the bucket couldn’t inadvertently fall back down into the well.
A metal cup was then dipped into the bucket of water and the fresh cold drink was given to us kids.  It was just cold water, the same water that come out of my grandparents’ tap, but somehow seeing it come directly from deep in the earth and the whole process of drawing it up made that water taste really special.
While I was thinking about it yesterday, I realized what a unique experience that well had given us kids.  I bet there aren’t many adults alive today who grew up in the US that had that same experience.  Often we kids would get a pebble from the driveway, sneak over to the well and drop it in and wait for the delayed splash when it hit the water.  The well is one of those treasured memories to me now.
The well still exists at my uncle’s place, although it has been renovated.  It was made of brick, like the new version, but its shape was square instead of round.  The roofed structure was more ornate and painted white instead of the more earthy look it has today.


My paintings can be seen at:  davidmarchant.ca
Posted by Life in BC's Robson Valley at 10:30