At The Train Station 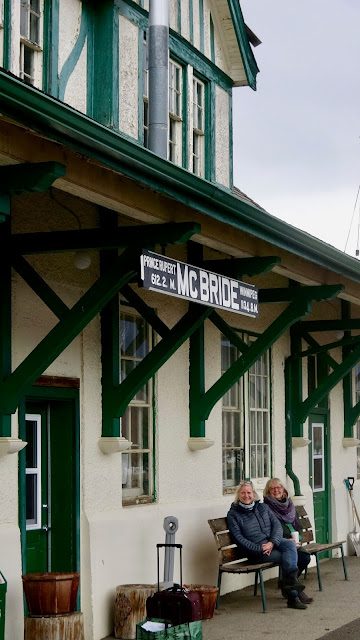 We spent a lot of time waiting at the train station yesterday.  Our friend Di, who came to visit with us for a few days, came on the train from Jasper on Friday, and yesterday she had to catch the train back.  We took her to the station in plenty of time, under the ridiculous assumption that the train might arrive early.  All during the morning Joan and Di continually checked the Via Train app, to keep track of its progress from Prince George to McBride.  Amazingly enough, it seemed like it was going to be on time.
We have had enough experience with the train to know, deep down inside, that this was a ludicrous idea, but we didn’t want to take any chances.  The Via train is not the priority on the tracks, freight is, so while it appears that the Via train is making good progress, eventually you see on the app that it is not moving, it is just sitting there in the middle of nowhere.  Sitting.   Sitting.   Sitting.
And the Via app is not that reassuring either.  It has two parts, a map showing the train’s location along the route, and a text that tells your where it is.  Unbelievably, these two sources, which are supposed to be reporting the same thing, usually give two different locations.
As we sat at the station waiting, we visited with a few acquaintances that drifted by.  We watched a huge flock of geese, there must have been a thousand of them, fly over us.  We talked, I took some photos, and eventually I drove Skye, who had been waiting in the car, down to Horseshoe Lake for a walk.  When I returned to the station, nothing had changed, Joan and Di were still there waiting.
Eventually we heard a train whistle west of McBride, and we all cheered.  The train finally arrived, an hour or more late, it picked Di up, and proceeded east, down the track to Jasper.
Train travel is such a nice way to travel, but the fact that Via has to play second fiddle to all the enormously long freight trains, and its trips are so incorrectly recorded on the app, sure sours the whole experience for travelers.