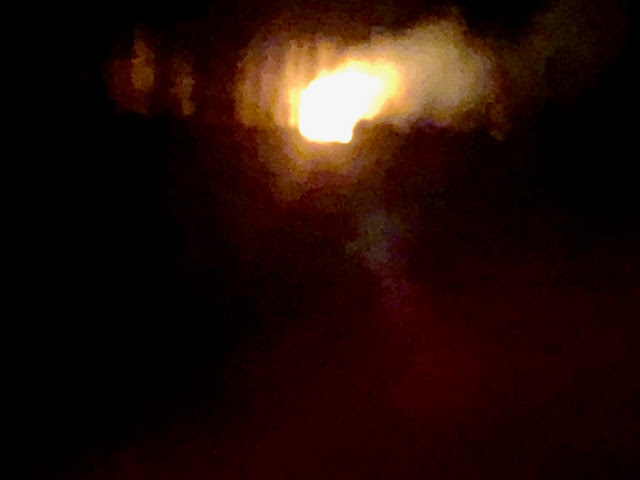 Last night when I walked out of the library carrying my instruments after our jam session, I could smell wood smoke.  It almost seemed like smoke from a forest fire, but I just put it off as someone’s wood stove.  After packing up the truck I started driving home, and when I started down the highway between McBride and the Fraser River, I saw where the smoke was coming from.  It was dark, but huge flames could be seen beyond the field near the river.  There is a farm there and I figured it was the big barn burning.
I stopped along the lonely highway, I didn’t have my camera, but I had my cell phone, so I dug it out of the pocket of my padded iPad case, got out of the truck and tried to take some photos, none of them turned out very well.
As I stood there beside the truck, an acquaintance came by and stopped.  As we watched the fire, she asked if I called it in.  I was appalled at myself.  While I had the phone in my hand, I hadn’t really thought of it as being a phone, I only thought of it as a camera.  I felt a bit stupid, but even had I called in the fire when I saw it, it would have been too late.  The barn was fully engulfed when I saw it, and it would have taken a while for the volunteer fire dept. to get too it.
Once I got home I told Joan about the fire as I lugged all the musical equipment into the house.  When I prepared for bed I dug into my pack to get my iPad which I use to read the news before I go to sleep.  To my shock, I discovered the iPad wasn’t there.  I had it when I dug my phone out of the pocket of the iPad case so I knew I had it in the truck when I got out to watch the fire.
I frantically searched all around the house, but couldn’t find my iPad.  I wondered if it fell out of the truck when I got out to take photos of the fire.  In a panic I got into the car and drove back to the highway where I had watched the fire, hoping to spot the iPad on the edge of the road.  It wasn’t there.  Did someone stop and pick it up?  I didn’t know.
I drove back home with a sick feeling in my gut over my missing iPad, which I really depend on.  When I drove toward the carport to park the car.  I saw a black rectangular shape in the snow beside the driveway.  After parking, I mustered all my hope and with a flashlight walked up to where I saw the dark shape.
My iPad!  It must have fallen from my pouch when I got out of the truck to unload my instruments.  I was so happy to have found it.
This morning I drove out to the highway to check on where the fire was.  Last night in the dark I assumed that it was the big barn that was burning, because of the huge flames, but this morning I saw that it was one of the smaller barns that had burned up.  The photo below shows the building as I used to exist.    I had been worried that if it was the big barn, may cows probably would have been killed, I doubt there were any animals in the smaller barn. 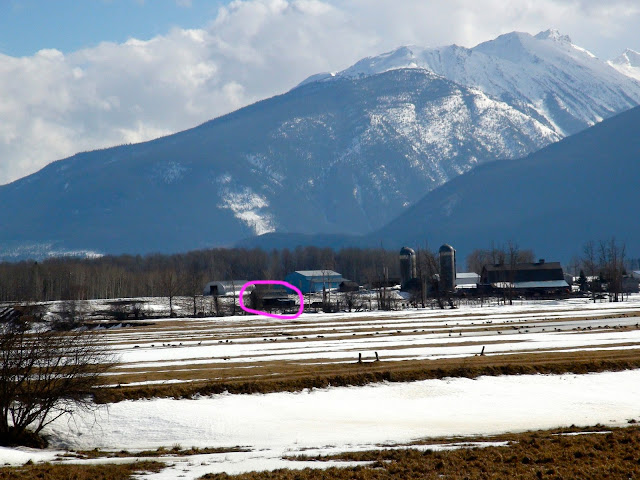