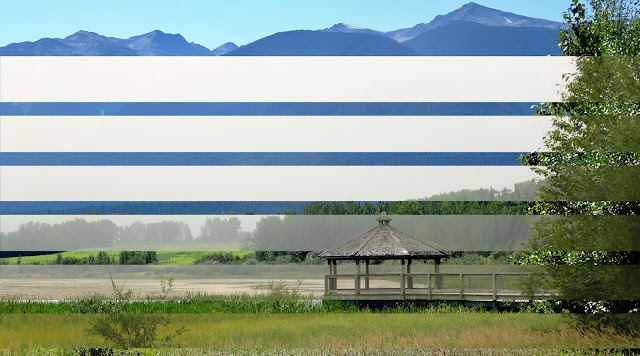 For the Robson Valley, this has been a summer of smoke, and it is not over yet.  In the photo above you can see a photo that I took of Horseshoe Lake yesterday (the white stripes) transposed over a shot I took on a smoke-free day.  Yesterday the mountains were totally obscured by the smoke.  The smoky photo was taken in the early afternoon.  In the evening the smoke was even thicker.
It sounds like BC is not the only place where forest fires are burning.  I heard a report on NPR yesterday where they interviewed a woman in Portland, Oregon who was also suffering from heavy smoke from a nearby forest fire.  She said the smoke was so thick there that the smoke detector in her house went off.  Luckily we don’t have that problem here (our smoke detector only goes off when we fix pizza or have bread in the toaster).