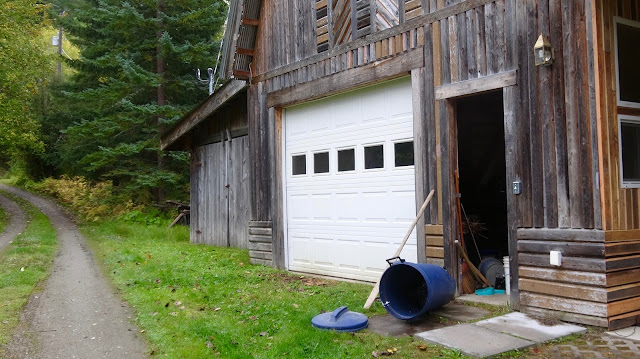 This was the crime scene that I encountered this morning when I let Skye out of the house.  I knew immediately what had occurred.  A bear had gotten into my shop overnight.  I was cautious as I went to investigate, because the accused might still be in there, but fortunately, it had taken what it wanted and had vacated the premises.
It seems the only thing the bear thought was of value was a week-old bag of garbage and a few apples.  It could have been a whole lot worse, because the whole cartload of apples and plums that I picked last Sunday were sitting in there practically beside the trashcan.  The bear took a few apples, leaving a few half-eaten ones on the floor, but didn’t seem at all interested in eating the plums, which I would have thought would have been a prime target.
The bag of garbage seemed to be the primary victim.  It had totally disappeared, so I suspect the bear dragged it off into the bush to pick through its contents.
This was a repeat offense: same crime had occurred before in exactly the same way, last year;  the shop door had inadvertently been left unlatched, the bear went in, opened the garbage can, and dragged the plastic trash bag and contents off into the woods.
The other day on the radio they were talking about bear’s remarkable memory for food, and how they can remember where they had gotten apples off of a tree, and will return to that spot every year even years after the apple tree had been sawed down.  I guess our neighborhood bear remembered where it got the trash bag of garbage and probably checked the door of the shop every time it came through, and last night it hit the jackpot again.
I really don’t feel any enmity toward the bear.  It was just doing what it needs to by bulking up for the winter, and it was our fault for not paying attention to the door latch.