The Northern Groundcone, A Bizarre Plant 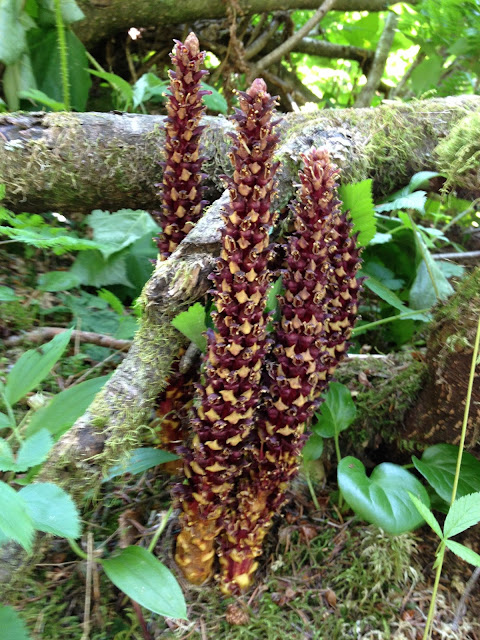 Even though I have been kicking around in the Robson Valley for 40 years, and have always been interested in plants, I saw one on Saturday while working on the Goat River Trail, that I had never seen before.   It was exciting to discover such a weird organism and I didn’t have a clue what it was.
I was afraid to take my new camera out on the workday, so instead I took the old one that had been dunked in the Fraser River.  It still works, but the lens is a little foggy so the photos aren’t as sharp as I would have liked.  Anyway I used it to take some photos of the strange plant, and also used my aging iPhone for some shots.  I have a hard time holding my iPhone steady when I take a photo.
Above is the iPhone shot, below is one from my old camera.
I couldn’t identify the plant with any of the plant books I have, so I sent an email to Barb Zimmer, the local plant expert.  She was excited to see the photo, she identified it as a Northern Groundcone (Bosniakia  rossica) and told me she had never seen one before.
The groundcone (named because it looks somewhat like a pine cone) is a pretty rare plant.  Usually it grows further north, like in Alaska.  Like a fungus, it has no chlorophyl, so can’t generate its own food, and has to grow and feed on decaying wood in the ground.
Seeing the groundcone was the highlight of my day working on the trail.

SIDE  NOTE: I mentioned my old camcorder which had been dunked in the Fraser River when I overturned the canoe I was in.  That happened when I was helping out with a film that was being made for Canada’s 150th Birthday.  The film was made up of people canoeing on Canadian rivers while singing “Oh, Canada”.
The very short short video is now out and you can see the snippet filmed in the Robson Valley, where our group sings the second line of the song (“Our home and native land”) at this link:
https://www.youtube.com/watch?v=sV-3YkxhDlQ 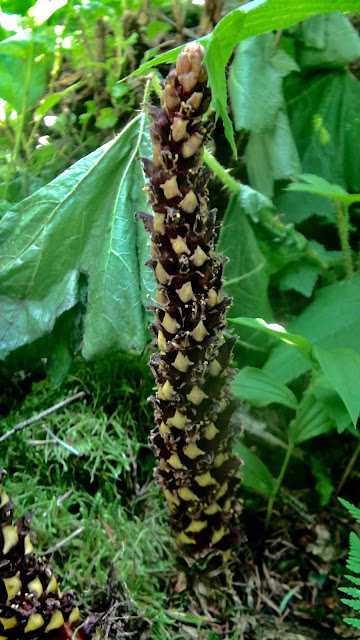