Critters In The Barn 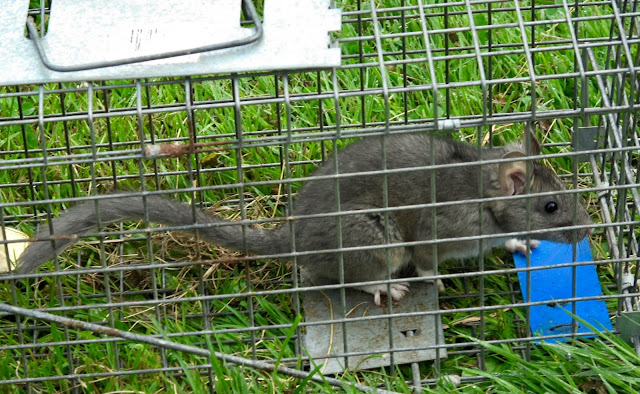 Just because I know longer have any livestock in the barn, doesn’t mean there aren’t animals living out there.  In the past, I have seen owls, weasels, neighborhood cats, and of course mice in there.  The other day when I walked past the barn I saw a packrat scampering up the walls and slipping into the top story of the barn.  I have had them before, and wasn’t keen on having another one set up housekeeping there.
Packrats are really cute and rather gentle animals, that would probably make nice pets if it weren’t for two problems:  they stink, and they make quite a mess.
I don’t like to kill animals, and so I borrowed a live trap from a friend and put it upstairs in the barn and sprinkled some cat kibbles in and around it.
The next day when I climbed the stairs I thought I had caught the packrat, but upon closer inspection saw that it was just a squirrel (photo below).  I took it outside and let it go and reset the trap.
This morning when I checked I was gratified to discover that I had finally gotten the packrat.  I carried the trap (and enclosed packrat) into the car and drove it out to McBride Peak road.  I figured that would be a good home for the animal since they like habitat with rocks and boulders.
When I opened the trap the packrat scampered out and ran up a tree, which was something I didn’t expect, but it was again on its own and I hope that it will soon adapt to it’s new home. 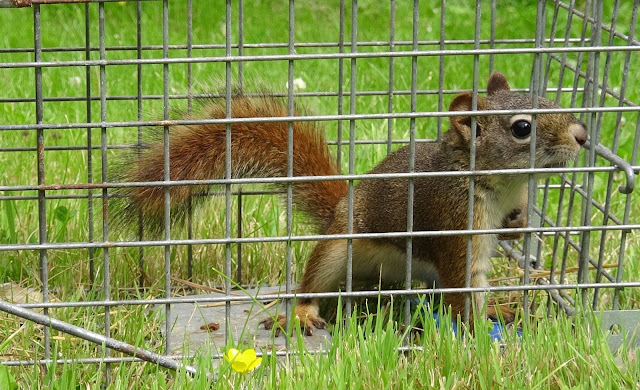