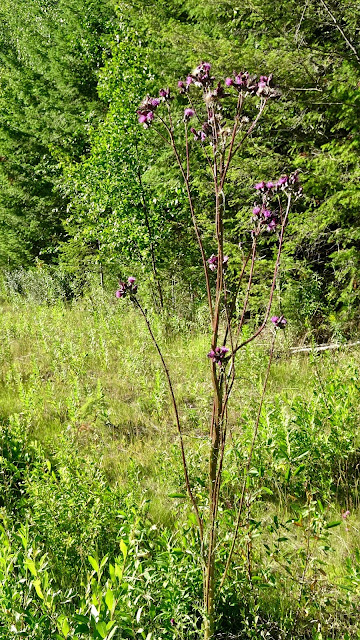 The Marsh Plume Thistle (Cirsium palustre) is moving closer and closer to our property.  It is a nasty, very invasive plant, originally from Europe, that has taken hold and is spreading through the Robson Valley.  I first saw it maybe 25 years ago while I was working for the BC Forest Service.  It spread through cutblocks, beside highways and roads, and was happy to establish itself in wet areas, dry areas, sunny areas, and shaded areas.
Yesterday I saw the first one on the side of our road, about a quarter of a mile from our house.  It was easy to spot, this one was 6 ft (2 m.) tall, with a spiny stem, hardly any leaves, and with clusters of purple flowers.  When I got home from seeing it I walked back to the pest and cut it off, but it already had some of its fluffy seeds formed, so it probably won’t be the last one I see along our road.
The plant has a two year growing cycle.  First year is forms a “rosette” a ground hugging leafy plant, and the following year sends up a tall stalk with the purple flowers.  The reason it has spread so rapidly is that it has no natural enemies locally, except for me, whenever I am out somewhere, and see a rosette or second year plant I stomp it up with my foot.
When I was with forestry and they became aware of it’s spread, they did try to introduce an insect that fed upon them, as a biological deterrent to the plant, but it failed to stop its invasion.  I think it probably initially came into the valley by way of the railroad.

You can see my paintings at:  www.davidmarchant.ca
Posted by Life in BC's Robson Valley at 09:30