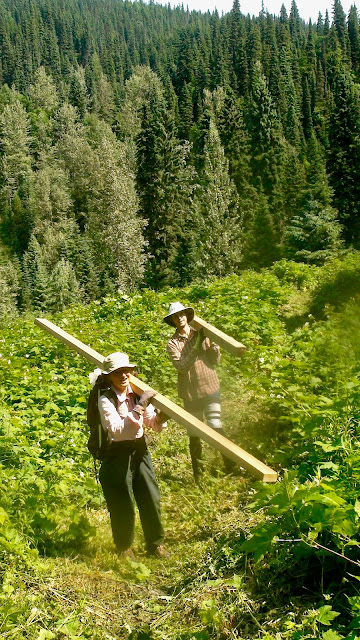 Yesterday I was out at the Upper Goat River Trail to help carry lumber and supplies two kilometers down the twisty hilly path so that they could be used in the construction of a walkway through a bad part of the trail.  It was an exhausting day.  We were carrying and dragging rough-cut 2” x 4” pieces of cedar 12’ long, 8 foot 4” x 4”s, and a variety of metal pieces for the construct.
All day, back and forth, up and down the trail, with frequent stops to catch our breath and drink some water out of the Goat River.  I manned a wheelbarrow for a while pushing loads across the slide area you see in the photo.  It was frustrating work because of all the small boulders that prevented smooth passage, and big roots in the treed area that often stopped the wheelbarrow dead in its tracks.
After everyone’s first trip the path looked like a debris trail as people who were too optimistic about what they could carry on their first trip, dropped some of their load of lumber along the way when they realized how far they were going and how heavy their burdens were.
By the time I got home yesterday, I was so stiff and tired I could hardly move.  They are planning to be out there working again today, but I decided not to join them because I need the day to recover.