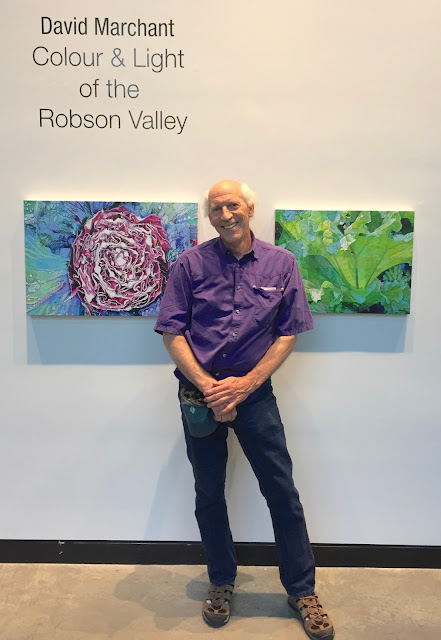 I felt like a celebrity over the last two days.  It was the opening of my show in Prince George’s Two Rivers Gallery.  I had to give a talk about my paintings on Thursday evening, then on Friday morning I did a live radio interview on CFIS, which is Prince George’s community radio station.
While a bit uncomfortable in both public situations, I got through the ordeals fairly well.  Of course I didn’t know exactly what to expect with the opening in the gallery, and was a bit disappointed that the crowd wasn’t bigger.  I had expected more people in the big city.  (I had bigger crowds for my shows in McBride, but there everyone knows me).  But the people who came were enthusiastic and complimentary, so that was good.
The paintings were hung in the Rustad Galleria, which is sort of a long hallway.  Below is a photo I took later, after the crowd had thinned out.
I found the radio interview much easier than the talk I had to give at the gallery.  In a interview all you have to do is respond to the questions you are asked rather than come up with the whole talk yourself.
I am happy to be back home in smoky and mosquito-ridden McBride, being more comfortable in my own familiar, surroundings.

You can view my paintings at:   www.davidmarchant.ca