Never Lean Over in a Canoe 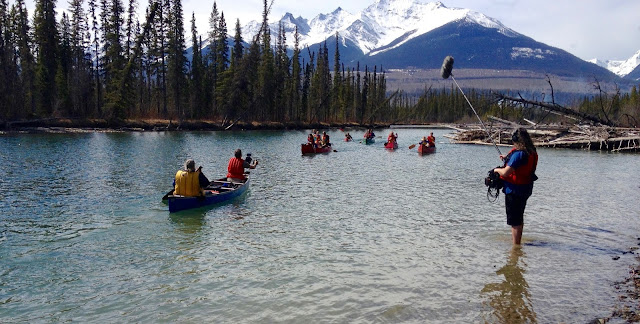 The title tells the lesson I learned yesterday.  Let me set it up.
A couple of weeks ago the FHA (Fraser Headwaters Alliance), our local environmental group, got a request saying that some film makers were going to make a movie about major Canadian Rivers to celebrate Canada’s 150th Anniversary.  They were looking for some people to be in canoes on the upper part of the Fraser River singing “Oh, Canada.”
FHA looked around, but it seemed that singing canoeist were not in great supply in the Robson Valley.  Yesterday was the date set for filming, and luckily we finally found 14 or so willing participants (and a dog) to paddle and sing.  Knowing the need, I volunteered even though I don’t have a great deal of canoeing experience.
I assumed I would be in the front of a canoe with an experienced canoeist in the rear who would be doing the main work of steering.  Unfortunately things didn’t really work out that way.  As it turned out I was put in the responsible rear position with Bruce, the film sound guy in front.
The flotilla set off near the old Tete Jaune bridge, and canoed a short distance downstream, where Ian, the cameraman decided to stop and do the filming.  I maneuvered Bruce onto the shore so he could do his sound collecting from there.  I sat alone in the partially banked canoe and watched.
A fancy big camera tripod was sitting upright in the middle of our canoe.   Earlier on, there had been some talk about laying it down and tying it so it wouldn’t get wet, it had been transferred back and forth between several canoes and somehow ended up in the standing position as I sat in the canoe.
After sitting there in the canoe for a while, I decided I should maybe back the canoe out into the river and paddle a bit closer to where Bruce stood.  I pushed off the bank then started to turn the canoe with the paddle.   As I did so, the canoe leaned to one side, and the upright tripod started to tilt and fall toward the water.  I panicked, not wanting to see it get wet, and lurched sideways over the canoe in an attempt to catch it.
My quick thinking action was a mistake.  When I leaned over the side of the canoe to try to get the tripod, the canoe leaned over also, and over we went.  I was dunked and found myself sideways in the cold waters of the Fraser.  I was still near the shore, he water was shallow and very clear, so I was able to see and grab the submerged tripod and put it back into the now uprighted and partially water-filled canoe.
I was wet and embarrassed, but fine, and the tripod didn’t really come to any harm by the dunking, but there was a major  victim in this whole affair--my camcorder, the camera I use every day for this blog.  It had been in its holster on my hip and it had been submerged along with me.  It is now deader than a door nail.
When I got back home, I put it in a bag of rice.  I heard that is one way to dry out iPhones that get wet.  Time will tell.
The film people seemed quite amazed at our local scenery   They filmed several takes of the canoeist paddling toward the camera singing the first two lines of “Oh, Canada.”  It will be the opening scene of their film and they were happy with the shots they got of the singing canoeist on the Fraser.  Now they will be traveling eastward to other major Canadian Rivers to film other people singing the rest of Oh, Canada.
I did have my old iPhone along with me and fortunately it was in a water-proof holder.  I took the photo above with that.

You can see my photo-realistic paintings:  www.davidmarchant.ca
Posted by Life in BC's Robson Valley at 10:00