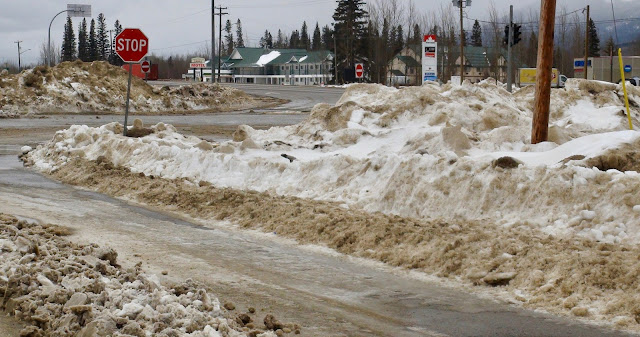 On Tuesday when I blogged about digging out from the blizzard we had overnight, I was not aware of what a big storm other places in the Robson Valley experienced.  Later that day there were reports on BC’s regional shows on CBC radio about the storm and McBride’s 5 foot (1.5 metre) snowdrifts, I even heard from friends who are presently halfway around the world in Kenya doing lion research.   They had seen pictures of “McBride’s Snowdrifts” in the Vancouver newspaper.
Obviously we didn’t get the full force of the storm on our road.   Yesterday when we drove in to McBride they had all the big machines out trying to clear snow from the streets, and I must confess they were pushing a lot of snow around.   The photo above shows the intersection of Hwy. 16 and Main Street.


My paintings can be seen at:  wwwdavidmarchant.ca
Posted by Life in BC's Robson Valley at 09:58