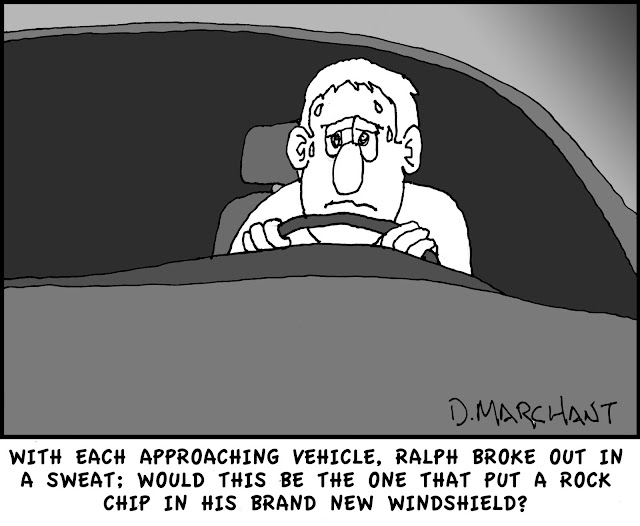 One of the things you learn pretty quick after driving on a winter highway in rural British Columbia is that it doesn’t take long to get “dings” and cracks on your windshield.  We realized that it was folly to buy a new car during the winter, but we ended up doing it, so we knew that it would only be a short time before our crystal clear windshield would be marred.
I drew this cartoon in the middle of January, and 5 weeks later, fifteen minutes after we pulled out of our driveway for our road trip to Indiana, a truck streaked by, a rock flew up from its tires, which struck our windshield.  For the next couple of days as we drove south we watched the ding turn into a crack which slowly grew across the passenger side of our brand new windshield.


So now the windshield will have to be replaced after two months of owning the car.  For sure I will not get it done until spring has been fully established and the highways are no longer “sanded” (graveled).  It will be nice to have a clear windshield to look though during the summer months, at least until the snow falls again.

Take a look at my paintings:  www.davidmarchant.ca
Posted by Life in BC's Robson Valley at 09:25