A Bridge for Wildlife 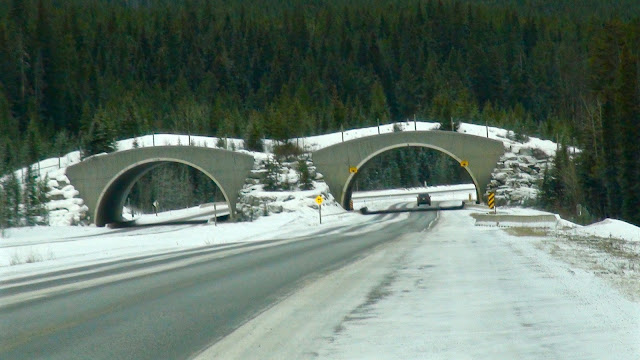 One of the down sides about driving across the continent is seeing so many corpses of wildlife lying on the side of the road.  Body after decaying body, lined the edges of Interstate highways.  The death count was appalling.
The Trans-Canada Highway  (Highway 1), Canada’s most prominent roadway, winds its way through the heart of Banff National Park, so over the years it was responsible for a huge share of the destruction of Park animals, but for several decades now, Parks Canada has tried to minimize the carnage by fencing the sides of the highway and building bridges across it, providing a safe route for animals to pass from one side of the highway to the other without playing Russian roulette with cars and trucks.
The first of these bridges was a bit of an experiment, since no one knew if wildlife would use them, but they must work, because there seem to be more and more of them every year.