Pine Beetle Moves into the Parks 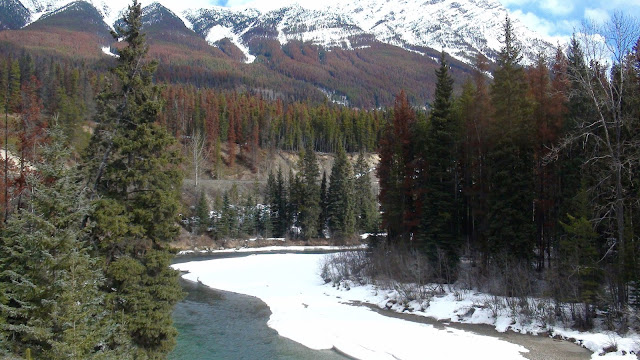 The warming climate has already had a devastating effect on the forests of BC.  The mild winters have allowed the Pine Bark Beetle, that used to be kept in check by cold snaps, to thrive, killing millions and millions of pine trees over hundreds of thousands of acres across BC.   As the pines die they turn red in color.  As you can see in this photo taken in Mt. Robson Park, the beetles are now moving east and their work is becoming visible, not only at Mt. Robson, but also in Jasper National Park.
Both Jasper and Banff parks are mostly covered with Lodgepole Pine trees, so the parks will be taking a massive hit.  There is really no way this infestation can be stopped.  Every mature pine will die.  The parks will never be the same.