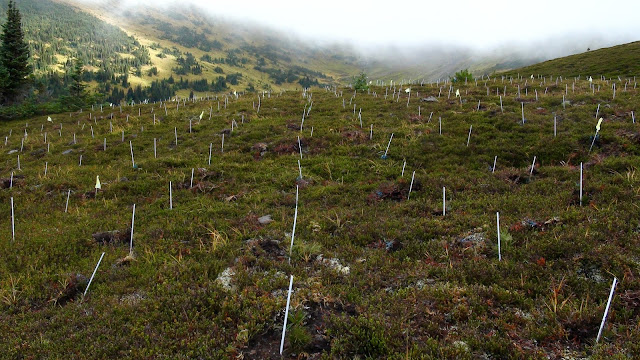 In July, I was puzzled to see the Koeneman Park parking lot full of vehicles, including pickups from Environment Alberta and Parks Canada.  I couldn’t really figure out why all the government trucks and out of province vehicles were there.  Well, I found out.  It all had to do with Whitebark Pine, which in BC grows high up in sub-alpine areas on the mountains.
Because of the severe conditions in which it grows, it ends up short and stubby in shape.  In warmer areas it grows to be a tree of normal height.  Most pines have needles in pairs, but the Whitebark has clusters of 5 needles.
The Whitebark Pine is an endangered species.  It’s existence is being compromised on several fronts.  The Mountain Pine beetle, a pest that has eradicated more than half of the Pine trees in BC, will also attack and kill Whitebark Pine.   There is also an introduced pathogen called Blister Rust that is decimating the tree.  Things really don’t look good for the Whitebark.
The group that was parked at Koeneman Park was the Whitebark Pine Ecosystem Foundation of Canada.  They had held a workshop in Dunster and the following day had a field trip up McBride Peak.
Last Sunday when I went on the hike up McBride Peak I was surprised to see two areas in the alpine, marked out and planted with Whitebark seedlings.  This is a trial to hopefully find trees that show some  resistance to the blister rust.
The Whitebark provides food for grizzly bears, and the Clark’s Nutcracker, a bird which also helps the Whitebark by planting new ones.  It buries the seeds in the ground for later, then often forgets where it buried them and the seeds end up sprouting. 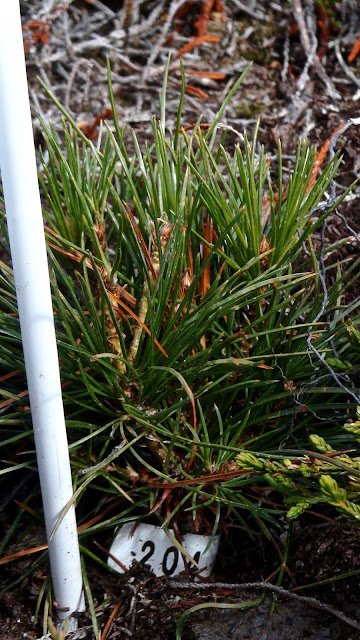 Visit www.davidmarchant.ca to view my paintings.