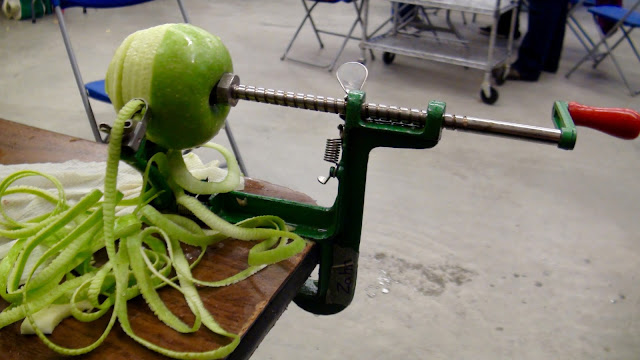 I think the first time I saw one of these gadgets was during a trip I took to Mexico back in the 1980’s, when I saw a street vender peeling apples.  I was fascinated by the long peel curling off of the apple as the crank was turned.  I immediately appreciated the ingenuity it took to develop something that could accurately slice off the peeling of an irregular shaped apple, but as I watched I didn’t realize that it was also slicing the apple into a long winding slice and coring the apple at the same time.
Last weekend when I helped make apple pies, I spent the whole time using one of these apple peeling machines for the first time.  I am still impressed with both the complexity and simplicity of the machine.  It worked really well except for the really deformed apples and the really large apples.
When I first arrived at the pie making workday, I was led over to the machine and was sat down and told how to use it, and as I said, I used it for the whole day.  It wasn’t until later that I realized that this particular machine was positioned on the table to be turned by a left hander.  Not knowing this, I just spent my whole day turning the crank with my left hand rather than my right, which probably would  have made the job a bit easier since I am right handed.
When I realized that everyone else was cranking with their right, it was too late, since by that time I was used to using my left, so I just continued with it.
This is a really nifty bit of technology, and if I knew I had a lot of apples to process I would certainly buy one.