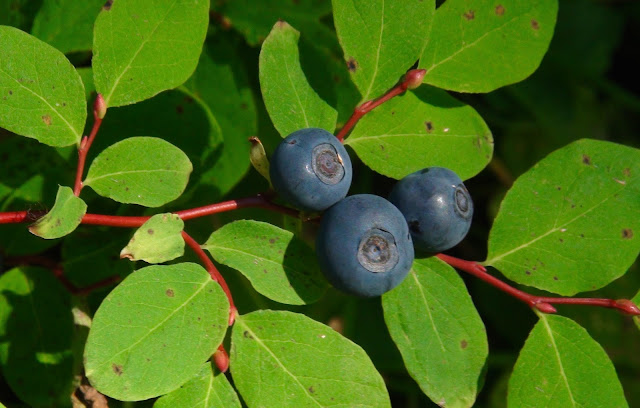 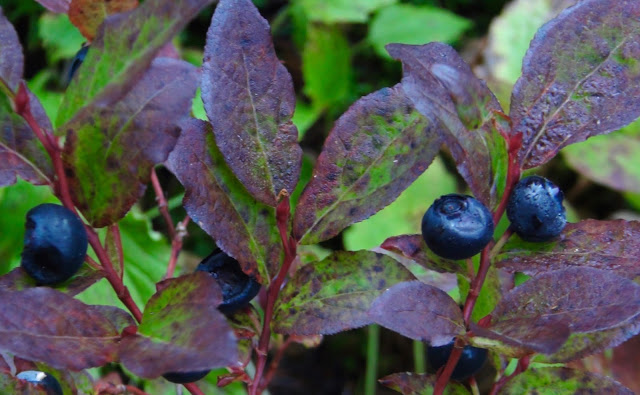 On Sunday morning I forced myself from my bed at 5:00 so I could get ready for a hike.  The Ozalenka Alpine Club had planned one to the Renshaw, which is probably better known as a snowmobiling area rather than a hiking destination.  It has a huge alpine area, and I had never been there.
Seven of us went, and we all squeezed into Al’s truck and bumped and jarred in unison for 23 km (14 miles) up the McKale logging road until we could drive no farther.  Once we had our daypacks on, we had to walk 4.7 km (3 miles) more along the deactivated road, before we started the steeper climb up to alpine.  While the alpine was the destination, getting there also had some points of interests.
First thing I noticed was all of the berries, both blueberries (top photo), and the more tasty, black huckleberries (photo below the blueberries).   Needless to say going through all these berry bushes slowed us down considerably as we made many stops to burst the succulent sweet spheres in our mouths.
It was in this berry-rich area that I came upon something that brought me back to reality.  There in a muddy section of the trail was a grizzly bear track, and it seemed fairly fresh (Photo below).  The photo is not great, but hopefully you can make it out.  The knife is 3.5 inches (9 cm) long to give you some scale.  A berry patch is exactly where you might expect to come upon a bear, busily stuffing himself to get through the long months of hibernation.  Luckily, this print was all we ever saw of the bear.  The group continued on, crossing a creek and then up a steep forested slope to the golden colored alpine.  (Photos tomorrow).
Yesterday as my sore muscles were recovering from the hike, the radio reported that two hunters  were seriously injured (one critically) when they were attacked by a grizzly.  It was sobering news, one never really knows what might happen out there in the bush. 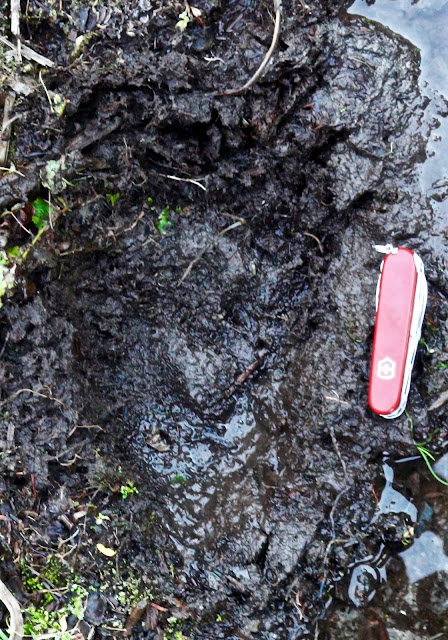