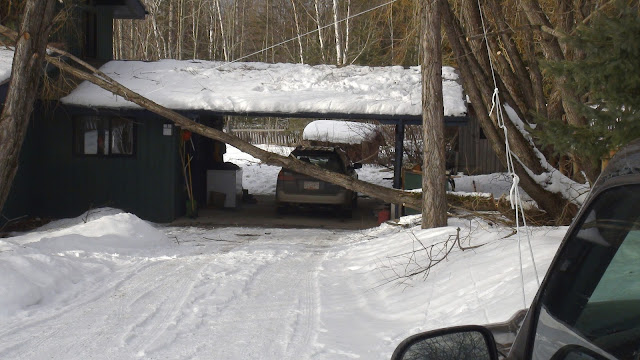 Shortly after we bought our house in McBride, about 35 years ago, we planted a few willow trees around the house.  They have grown tremendously since then.  We have enjoyed the shade they provide during the summer, but lately I have been noticing how some of the big branches have grown over the house.
The limbs are getting really thick, and I have been worrying that as they continue to grow, eventually they will break and crash onto the house.  I have been studying them for months, trying to figure out how I could get them down without damaging the house.  It seemed like an impossible task, but I did finally come up with an idea.
I figured if I could get a rope tied high on the branch, then if I could string it through a crotch on another branch and run it out to the driveway and hooked it onto the truck, I might be able to cut the offending branch until it started to lower, then by driving the truck forward, I could slowly lower the branch onto the roof of the house, where I could cut it up.  I wanted to do this when there was a lot of snow on the roof, so that it would sort of protect our tin roof from damage.
Yesterday, I put my idea to the test, and amazingly, it all worked out.  I had quite a time trying to get the rope tied high on the branch.  I tried throwing a spear, hooked on to the rope, but I couldn’t get it high enough.  I then tried throwing a ball of heavy twine over the branch, but it kept getting hung up on the bark.   I finally succeeded by standing on the roof, rigging up a wire which held the ball of string onto an extension pole tree trimmer, and tipping it over the branch.  I then pulled a rope over with the twine and looped it around the branch.
I was full of fear that the branch might be too heavy for the nylon rope, but the rope held, and I was able to slowly lower the branch onto the roof with the truck.
Once I had the branch all bucked up (the start of next year’s firewood), I dragged the smaller branches off to a brush pile I have in the woods.  I remembered that the deer really like to eat the willow twigs, so I spread them around on the snow.  It didn’t take but five minutes, before the deer were out there eating them.

To Read older blogs or see my paintings visit: www.davidmarchant.ca 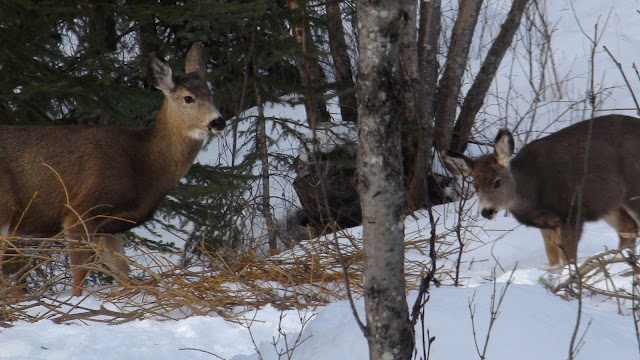