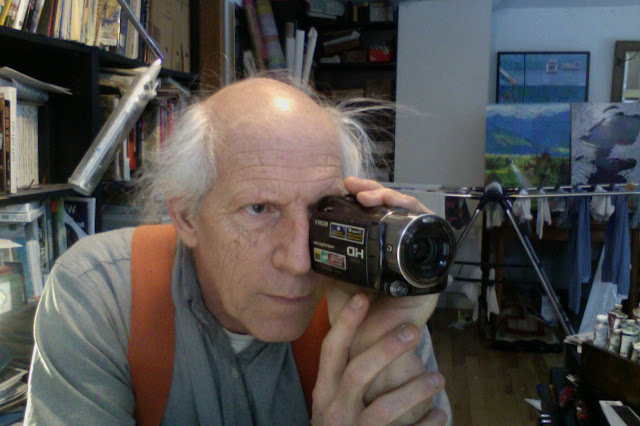 I quite often hear about people being addicted to technology.  Usually it revolves around the cell phone or internet, and I must admit, I am probably one of those addicted to the net.  The several times that our internet service has gone down, both Joan and I found ourselves pacing back and forth in the house, worrying about how long it is going to be off.
Yesterday, I discovered that I also have a real dependency on my camera.  I use it everyday for my blog, and I take it with me most everywhere that I go.
Yesterday, I had another opportunity to play some music with the people I jammed with, a couple of weeks ago.  We were going to play at a house in Dunster, which is a small hamlet, about 24 miles (38 km) east of McBride.
Along with my guitar and mandolin, I took my camera.   I caught a ride with Brad, who is the musician, who told me about the first jam session.  Once there I hung my jacket and camera on the back of a chair.
The jam included the same people that played at the curling lounge.  Again, I had a really enjoyable time, trying to keep up to the chord changes on unfamiliar songs, and leading the way on some of the songs I knew.  We broke up around 2:45 in the afternoon, I discovered that someone, had hung my jacket on a coat hook on the wall, I put it on, grabbed my guitar and mandolin cases, went out to Brad’s car.  Brad drove me back to my truck, which I had parked in McBride.  As soon as I transferred my instruments into my truck, I realized that I had left my camera at Lelani’s place, back in Dunster.
What an awful feeling suddenly overtook me.  I hadn’t realized what a powerful dependency I had on the camera.  I felt lost without it.  I drove back to my house, then I called Lelani, and she discovered my camera right away.  It was also hung up on a coat hook.   I immediately, jumped into the car and drove the 24 miles back to Dunster to get it.
What relief I felt, when it was back in my hands.  I will have to keep better track of it when I lay it down, I certainly don’t want to go through all that anguish again.

To see my blog archive or view my paintings, go to:  www.davidmarchant.ca