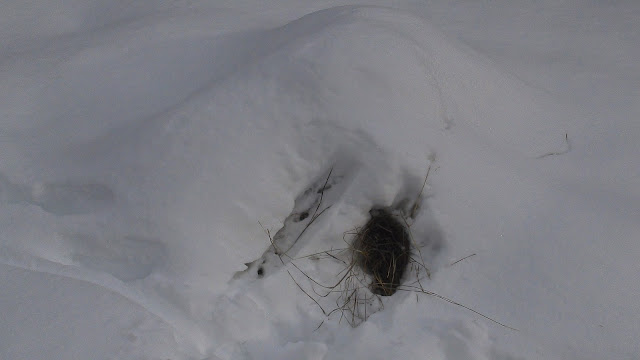 When I had a herd of angora goats, the grass in the paddock area stayed pretty short, as the goats grazed on it.  Since I no longer have the goats, the grass grows really long, so each summer I cut it down a couple of times, using my lawn trimmer.  I always hate to see anything go to waste, so I usually, rake up the long cut grass, which turns into hay, after it dries in the sun.  I then piled it into a small haystack.
Last year, when the hay was supposed to be drying, it got rained on several times.  This causes mold in the hay, but that didn’t bother me much because I was not going to feed it to the animals, but instead, just use it for mulch in the garden.  During the winter, the three foot high pile was completely covered with snow.
I noticed the other day, that the deer, had broken through the blanket of snow to eat the hay.  I usually think the deer around here have it pretty good, with all their visits to my compost pile, the peanut butter log and bird feeder, and the fresh willow twigs from the branch I cut down, but, I guess, if they are digging into my old hay pile, they are still fairly hungry.  Now I feel bad and wish the hay in there was of better quality if they want to eat it.

To read older blogs and to view my paintings go to:  www.davidmarchant.ca