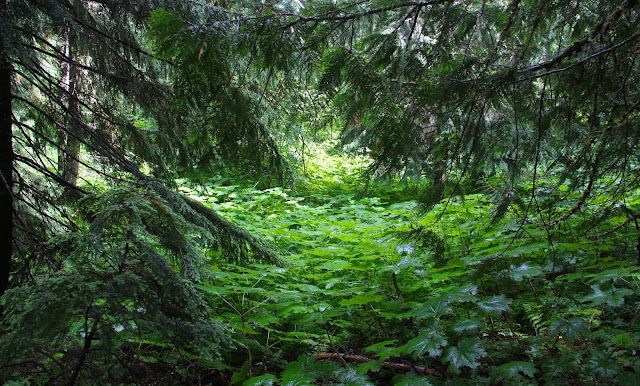 After recovering from my broken wrist, I was fortunate to leave Far West behind and get a government job making maps at the local BC Forest Service office.  After five or more years at the job, I was surprised to discover that Bob had begun working there too.  By this time, instead of drawing maps, the Ministry of Forests had me timber cruising.  That meant going out into the forests, bush-whacking compass lines through the bush, periodically stopping to measure the diameter and height of trees, and looking them over for indicators of potential rot.  For this job I needed a helper, and Bob was usually that helper.
We spent hours together, tramping or snowshoeing through unexplored forested areas, often getting there by ATV's (All Terrain Vehicles), helicopters, or snowmobiles.  In those ancient times an ATV was not a “Quad,” but a motorized three wheeled “Trike”.  Bob was a “motor-head” and loved being on snowmobiles and trikes, I was not and depended a lot on Bob's knowledge of the vehicles to get to our timber cruising areas.
I especially remember one excursion on trikes out on the Goat River Forest Road.  Bob, who was very comfortable on the machines, gunned out in front, and timid me, lagged behind, but I had reason too, because for some reason the trike that I was on kept pulling to the right, forcing me to really hold it to keep it on the road.  The big reason for my concern was that their was a steep drop off on the right side of the rough logging road.
At one point, I lost control of the trike it veered sharply to the slope, luckily I was able to jump off, but the trike went over, coming to rest about 10 feet below against a big log that on the slope.  I don't remember how Bob and I managed to get the trike back up on the road, but it took most of the day and a lot of grunting and pushing.  Once we had recovered it, we didn't really have time to do any timber cruising, so we loaded the trikes back onto the trailer and drove back to the office.
Another memorable day with Bob was when we were timber cruising an area way out McKale River.  It was a miserable cold rainy day.  We both had our rain gear on, but still all the measuring and recording of gathered information on the cruise card with our bare, wet hands, made for a really terrible experience.  Our misery was compounded because the cedar forest was thickly covered with Devil's Club.  Devil's Club is a horrible plant covered with tiny thorns, that stick into you, then fester.  These Devil's Club were as tall as we were and it was extremely uncomfortable to have to plow our way through the wet spiny plants to do our job.
When we had finished our day's work, we were far from our truck, and I remember how cold, wet, and chilled we were fighting our way through the Devil's Club to get finally get to the refuge of our Forestry Truck.
A third memory I have doing forestry work with Bob took in the winter.  We were checking for Spruce Bark Beetle out in the Goat Drainage.  We were flown to the area by helicopter, and there wasn't a good place to drop us off, but we were finally put down beside the in a narrow spot beside the river.  It was not a great day, overcast and slightly snowing.  The pilot told us he would pick us up in the same spot at 2:30 then took off.
Bob and I spent the day snowshoeing through the slopes of the forest looking for small holes on the bark of spruce trees where the beetles had bored through the bark.  By the time we made it back to the helicopter pick-up area, the weather had really deteriorated.  It had darkened quite a bit with a rain-snow coming down, and a much lower cloud cover.
The helicopter didn't come to get us at 2:30 because of the deteriorating weather conditions and after about 45 minutes we were giving up hope that it would be able to make it at all.  We decided that  we might have to spend the night, so we began to build a fire.
As evening approached and the sky continued to darken, it was with great relief to then hear the far off thumping of the helicopter approaching through the cloud and then landing.  Bob and I took off our snowshoes, scrambled into the chopper, and were off, very relieved that we wouldn't have to spend a cold soggy night huddled around a sputtering fire.
On another winter day Bob and I where flown by helicopter to check on a cruise on the high slope of a mountain in Castle Creek.  The helicopter couldn't find a level place to land, so finally just found an open spot on slight  slope and hovered and told us to get out there.  I was the first one out, I opened the door, stepped down to the helicopter's running board, then jumped down to the snow below.  The snow was very powdery and I sunk up to my hips.  As I floundered, Bob threw me my snowshoes and I struggled to get them on.  Then he had to go through the same procedure.
We spent the whole day out snowshoeing and working our way downward through the cruise area checking on the cruise plots.  Luckily at the bottom of the area there was an area where the helicopter could easily land and pick us up.  I am sure Bob felt the same relief that I did to see and hear it coming over the mountain after a hard day of slogging through the deep snow.