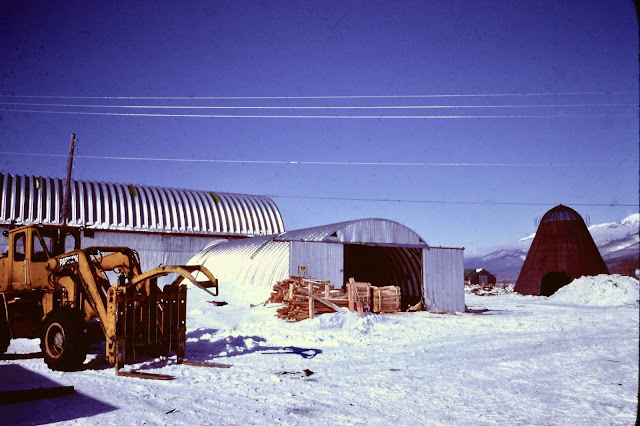 A couple of days ago I was saddened to hear of the death of Bob Elliott, a guy I always liked and someone with whom I had spent many a day working with.  I first met Bob in 1978, after moving to McBride.
At the time I didn't have a job, and when my unemployment insurance ran out, in desperation I took a job at Far West, a local mill that split cedar for rail fences.  It was rumored to be a very unsafe place to work, but I was desperate and applied, and they hired me right off.  I vowed to myself safe and be very conscientious about safety.   Bob's father owned the mill and Bob and his brother were the supervisors.  Bob was the most “human” of the mill's management.
While I worked at Far West, co-workers lost fingers and hands, I tried to stay whole by only doing jobs that seemed safe, but in 1980 the mill lived up to its reputation and I had my accident;  falling from a bundled load of fence posts onto the concrete floor, breaking my wrist.
Looking back on the experience now, I realize that it was probably Bob that caused the accident, since the mill was out of the regular metal binding straps which I used to secure the bundles of fence posts.  Bob brought me some thinner metal straps, telling me they were just as strong, and that I should tighten the bundle up, just like I always did.  That is what I was doing, cinching up the strapping, when the strapping broke,  sending me tumbling to the floor.
Anyway Bob came to my rescue and  drove me to the hospital.  By the time I got to the hospital I was starting to go into shock.  I climbed out of the pickup and told Bob I thought I was going to faint.  He came over and put his arms around me to support me, but then I did pass out, falling to the ground,.  He later told me he wasn't prepared for how heavy my dead weight was, but he helped pick me up from the snow-covered hospital parking lot, and maneuver me into the wheel chair that the hospital staff had brought.
Despite this rather negative story featuring Bob, he was a friendly, gregarious, “good ol' boy” type person who I always liked.
I will have some other stories of Bob tomorrow.