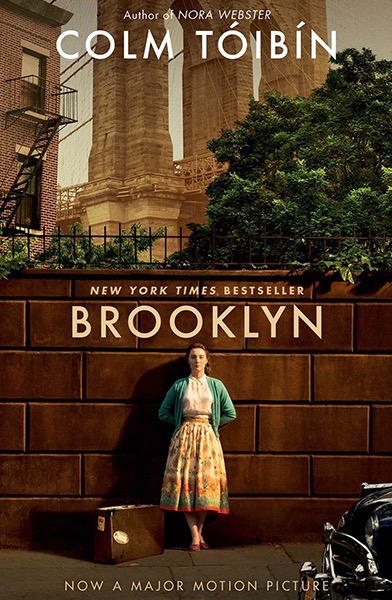 As you might expect the McBride Library Book Club is no longer meeting due to the Corona Virus.  Instead we sent in our book reviews by email and will share them that way.  Our reading theme for March was Books by Irish writers.  Here is my review of Brooklyn by Colm Toibin:

I enjoyed the movie based on this novel and was curious as to what the book was like.  The storyline is set in the early 1950’s and is centered around Eilis, a young lady living in Ireland with her mother and Rose, her vibrant older sister. Eilis who has had some education in accounting, took a job in a food store run by a grumpy and eccentric woman.  Her salary helps support her family.
Rose, the attractive older sister is also a popular working girl, and spends most of her free time playing golf, while Eilis is more of a homebody.  Unexpected an Irish priest from America visits the family and speaks of the good job Eilis could get if she would move to Brooklyn.
To Eilis the visit seems like a setup engineered by Rose and her mother, and soon find herself preparing for the move, although deep inside she doesn’t want to go.   The novel does a wonderful job of describing the horrendous five days that Eilis endures on her voyage to America, racked with sea sickness, and confined to her small third class cabin in the bowels of the ocean liner.
Once she arrives the priest collects her, finds her a room in an all women’s boarding house, and a job as a sales person in a woman’s clothing store. Slowly Eilis adapts to her new life, until a handful of letters from home throws her into a severe bout of homesickness.  Again the priest comes to her rescue by enrolling her in night school.
When Eilis meets Tony, a really nice Italian boy at a Catholic dance, a romance begins which immediately wipes away her homesickness.  Although she really likes the boy, he quickly falls head over heels in love with her and talks of marriage, something which Eilis isn’t ready for.
Shortly after Eilis gets her business degree, she is informed that her sister Rose had suddenly died, and she makes plans to travel back to Ireland to temporarily help her grieving mother, but before she can leave, she is pressured by Tony, who is afraid of losing her, into a secret marriage.
Once back in Ireland she quickly readjusts to life there and starts falling in love with an old acquaintance.   She tells no one of her marriage, but the gossipy-old-lady grapevine reaches across the Atlantic and Eilis is faced with a hard decision before the news becomes publicly known.
I really liked the way the storyline dwelled on the inner thoughts of Eilis during all of her trials and tribulations.  It was a very descriptive and well written novel.