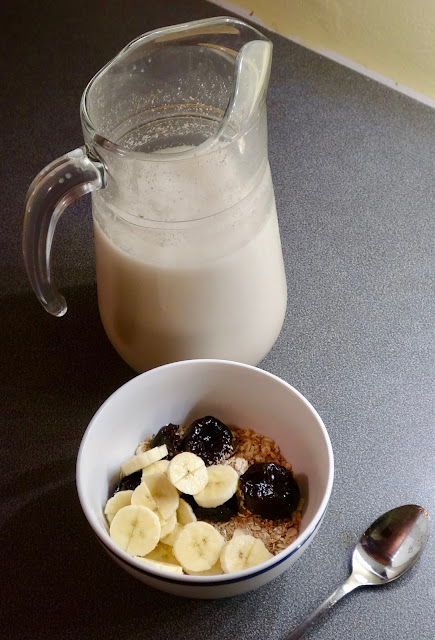 This morning I had oat milk on my oats.  I have had oat milk a few times before, but the difference this morning was that I made the oat milk.
I generally have soy milk with my oats, but have been interested in trying oat milk since I discovered that such a thing existed.  I have been troubled that a lot of soy comes from recently cleared jungles in Brazil, while oats are grown in long existing fields, a lot of which are in Canada.
I had read about oat milk and was eager to try it, but it wasn’t readily available any place around where I live.  Costco did have some not too long ago, and I bought some, but they haven’t had it since.
Whenever I first try one of these plant based “milk” products (soy, almond, or coconut)  on my cereal, that initial taste usually doesn’t impress me, but after a few meals I get used to it and like them.  That was my reaction this morning to the oat milk I made.  Hopefully I will get used to its taste too.
To make it I put 3/4 of a cup of rolled oats into a bowl with water to soak for a few hours, then I put it on a sieve and ran cold water over it to prevent it from being slimey.  When the exit water was clear, I put it in our Vitamix machine with a quart of water, set it on “High” to really grind it up, first for a minute, then a minute rest, followed by another minute on “High”.   I added a pinch of salt, a bit of sugar, and vanilla, then put it in the fridge overnight, so it would be cold this morning for my cereal.
My “cereal” is just rolled oats.   I don’t cook it, just add some fruit and “milk” and I eat it cold.