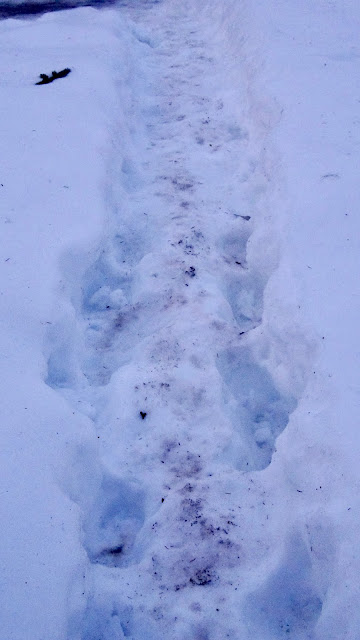 As winter progresses and the snow gets deeper and deeper, you reach a point where you just have paths to get to the places you need to get to outside.  The paths I have made to get to the woodpile, the compost pile, the barn, and one I made around the house for walking Lexi, have been working well, up until now.   Since our big cold spell the temperatures have warmed up greatly, and have been above freezing during the day and some nights.
That warm weather has softened the snow, and now when I walk down any of our snow paths, if I step anywhere except the exact middle of the path, my foot slips to the side into the deeper snow.  As a result, the walkable surface of the paths are getting narrower and narrower, which creates frustration when you are doing something like carrying an armful of firewood and you keep slipping into the deep snow at the edge of the path.
Usually this path deterioration happens as spring approaches, but we aren’t there yet, so I guess I will have difficult walking for a while.
Yesterday I had to drive up to Prince George for an appointment with the periodontist, and it was a ordeal getting up there.  Since it had been so warm for the last few days, I assumed that Highway 16 would be clear and give me an easy drive so I didn’t bother to get on the internet to check.  When I got on the highway I quickly I discovered that the driving conditions were horrendous.
A freezing rain had fallen creating layer of black ice.  I saw a couple of semi’s jackknifed and in the ditch, many more were just parked along the side of the road or driving extremely slow (my speed for a while was 22 kph (13 mph) for a while when I was behind one truck.  There were numerous other vehicles in the ditch.
It was a long slow drive to PG.  Fortunately I made it there in time for my appointment.
Everything is certainly a whole lot easier in the summer time.