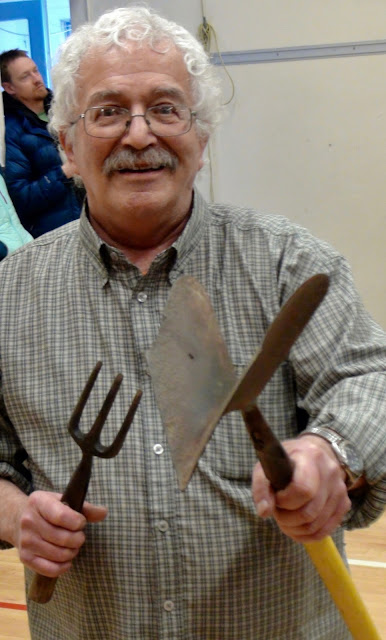 One of the Seedy Saturday events that I found really interesting was called “My Favorite Garden Tool.”  The tool I found most interesting was Pete’s furrow maker (on right side of photo).  His father had used such a tool in Lebanon and he discovered that he could find no such implement after moving to Canada, so he had a blacksmith make him one.  When his father got to the age when he know longer could garden, he gave the tool to Pete.
When you draw the furrow maker through the soil, it makes a nice groove for you to plant in.  Once you put the seeds into the furrow, you turn the tool over and draw the two wings over the sides of the furrow, and it pulls the soil back over the groove thus covering the seeds.
Pete’s tool seems like a really useful garden implement.