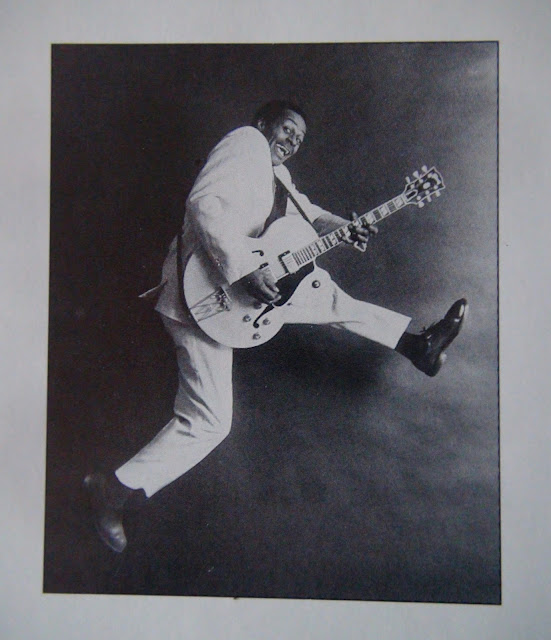 Another rock and roll pioneer (and personal favorite) has left the stage.  Yes, the media is full of the fact that Chuck Berry has died, but he had a good 90 year run and left a lot of foot stompin’ music in his wake.
Whenever I start thinking about my early introduction to rock and roll, Chuck Berry is always the first musician that comes to mind.  As kids, whenever we were visiting our grandparents and the adults began sitting around and talking, my sister and I would slip out and make our way to my uncle’s bedroom, turn on his record player, and start rifling through his stacks of 45’s.  By far, my favorite record was Chuck Berry’s guitar-riffed “School Day.”  I loved the energy, the beat, the lyrics, the vocals, and the guitar style in the song, and still do these 60 years later.
Chuck Berry not only had an effect on the two kids in their uncle’s bedroom, but also on The Beatles, The Rolling Stones, and a myriad of other musicians, who developed and took his genre further.  Below are some of Berry’s other hit songs you might have heard by Chuck or other musicians:
“Roll over Beethoven”, “Mabellene”, “Rock and Roll Music”, “Johnny B. Goode”, “Sweet Little Sixteen”, “My Ding-A-Ling”, “Merry Christmas Baby”, “Nadine (Is It You?), and “Run Rudolph Run”.
At our Tuesday Night jam session, we always always try to do a song as a tribute to some musician who we liked, that has recently died, so I expect that this coming Tuesday we will play “Johnny B. Goode”.   It is a song that is already in our repertoire, which the group always enjoys playing, even though I always screw up the lead guitar part.
Rest in Peace, Chuck Berry, we enjoyed having you around.