Wait a Minute, I Have Some Drums 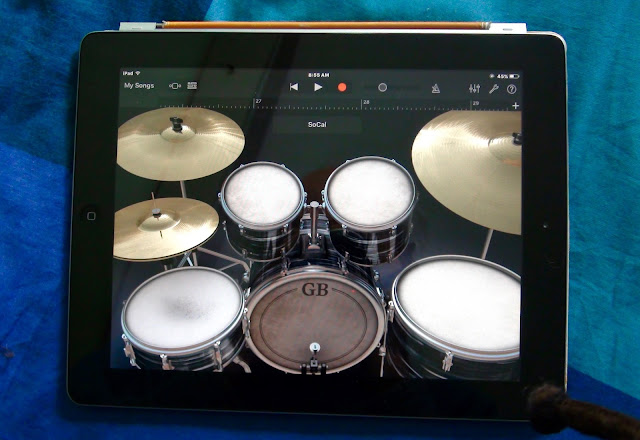 Every week, I look forward to Tuesday Night.  That is when we have our jam session.  There is a regular group of musicians that usually show up--electric bass, washtub bass, keyboard, slide guitar, accordion, tambourine, and me, with my mandolin and guitar.  It is an open jam, so sometimes others drop in to play, sing, or watch.
Two weeks ago, as we were playing, a guy wandered in and stood by the doorway to listen.  We didn’t know him.  When the song we were doing was over, we invited him to sit down on the couch, which he did.  Then we and offered him one of our song books with lyrics and chords, but he declined.  He sat there for a while listening to us play, but didn’t say much.  Finally, during one of the breaks between songs, he asked, “You don’t have a drum set around here, do you?”
Unfortunately, we didn’t, but I replied, “ Sorry, we don’t.  Do you play the drums?”
He did, I was feeling sad, because it would really be nice to have some drums intensifying the beat in our songs, but I know it is a real hassle to set up and take down a drum set every week for two hours of playing.  Then I had a thought.
“Wait a minute, I have a drum set on my iPad that we could run through my guitar amp.  Do you want to try that?”
I wasn’t sure how well it would work, but he was willing, so I opened my GarageBand app and plugged my iPad into my guitar amp.  He had never used anything like it before, you just tap on the drum or cymbal on the screen and the iPad makes that sound, and with it running through the amp, it sounds just as powerful and strong as a real drum set.
It didn’t take him long to figure it out, and it was great to hear the drums thundering and the cymbals crashing to the music for the rest of the evening.
I was hoping John (his name was all we found out about him) would return the following week, but he didn’t.  I don’t know if he lives around here, or was just passing though, or what, but it was sure great fun to have those drums playing.