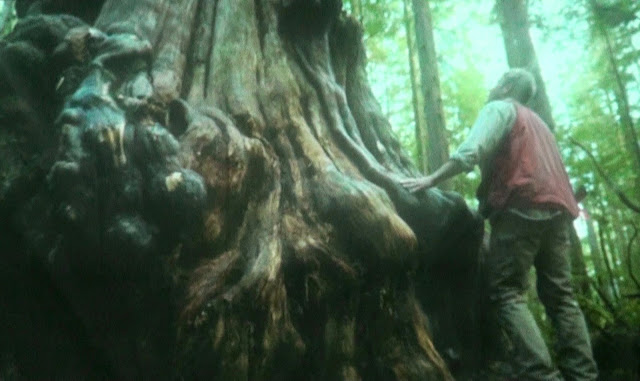 I saw a very interesting movie last night--”Hadwin’s Judgement”.  I went to the film out of curiosity, because one day when I was working for the BC Forest Service, I met the subject of the movie, Grant Hadwin, so the film had some personal connection as well as some local connection, since Grant Hadwin had spent some time working in the Robson Valley.
This story is also told in the book, “The Golden Spruce”.  Grant Hadwin grew up on the BC coast among the giant cedar and Sitka spruce forests.  He was an immensely strong and fit man who began working for coastal forest companies.  He loved the forests, and became more and more conflicted about doing the timber cruising and road layout work that led to the destruction of those forests.  I could really relate to this because I also did timber cruising for a while and experienced the very same feelings.
Grant’s frustration at the seemingly unstoppable destruction of the forests by the big forestry companies, eventually led him to cut down the “Golden Spruce” a unique and loved genetic mutant that had been “protected” by one of those big forest companies.  This act of protest was a severe misstep and alienated everyone (forest company, environmentalists, and First Nations People).
Seeing what hatred he had brought upon himself, Grant Hadwin disappeared on a kayak, while supposedly attempting to kayak to his trial across the huge and dangerous strait to Haida Gwaii.  “Wreckage” of his kayak, and some personal items where found suspiciously together on a rocky shoreline of Alaska, but it is a mystery as to whether he drowned, or escaped to the wilderness using his physical skills and bush knowledge.
The movie was beautifully filmed, and thought provoking.  I watched it at a showing sponsored by the McBride Library, projected on a bed sheet, but you can download it.
https://www.nfb.ca/film/hadwins_judgement

You can read my blog about the book, “The Golden Spruce” at:
http://www.davidmarchant.ca/Color_%26_Light/Blog/Entries/2013/8/30_The_Golden_Spruce.html