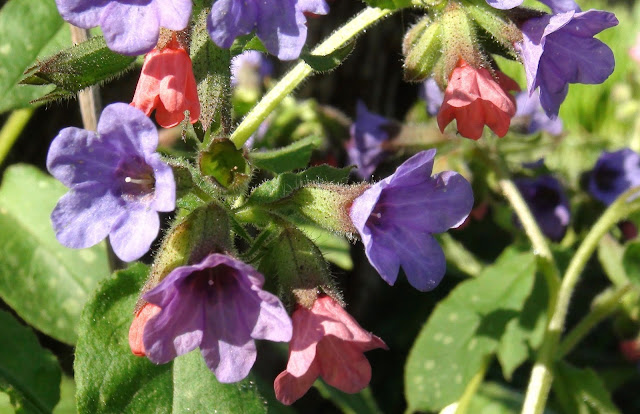 The spring of 1978 was the first spring we experienced after buying our house in McBride, BC.  Everything was new to us and one of the first things we noticed were the clumps of pink and lavender flowers that suddenly appeared around features in our yard.  The plant had spotted leaves and the flower buds had short hairs on them.
We learned that the plant was a Lungwort.  Lungwort seems to like what it finds in our yard because it thrives and is still pops up every spring, all these decades later.  It flowers early, so is popular with pollinating insects.
I find the name ‘Lungwort’ to be pretty ugly, and I guess in the past it was thought to help lung conditions.  It was during those times when it was believed that if some natural thing looked like some part of the body it would probably help cure problems in that part of the body, and people thought that the spotted leaves somehow resembled lungs.  The same bogus reasoning is still around today, note the thinking that a rhino horn is an aphrodisiac.

You can look at my photo-realistic paintings at:  www.davidmarchant.ca