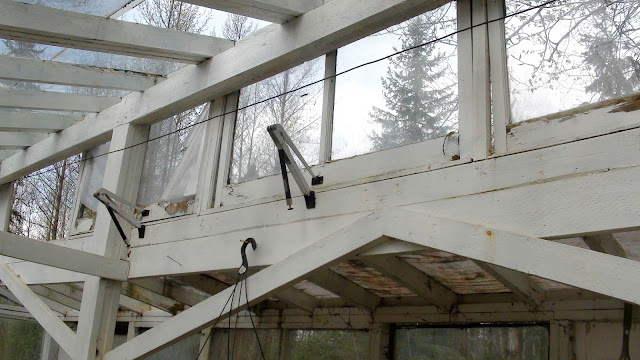 This spring I finally decided to replace the vent windows on my greenhouse, since they are rotting away.  My made my whole greenhouse using from castaway glass and windows that I had scrounged from various locations.  The windows I used for the vents were give-aways from a co-worker that used at my Forestry office, who had them left over after replacing her basement windows.
Because I made my greenhouse out of so many different sources, I had to design it all out on the computer make everything fit.   That was many years ago, so I had forgotten a lot of the details.
The first thing I did on my window replacement project was to measure one of the vent windows to see what dimensions I had to make the new ones.  It was 48 inches long.  I was going to replace 3 windows, and so just bought a thick piece of plywood and cut out four 48 inch frames, rather than try to construct frames using multiple pieces of wood.
I cut out the frames, sanded them, painted them and then attached white coroplast (a plastic cardboard-like material) rather than glass, since no sunlight ever comes through those vent windows.  Once I had them made I was ready to put them up.  I took out what was left of the first old vent window then attached the new one.  Things were going well, and I started on the second one.  I took down the old then held up the new one to attach the hinge.
“Wait a minute, what’s going on?”-- this second window didn’t fit.
I walked to the shop and got my measuring tape and measured the opening.  I was only 47 inches long instead of the 48 that I had made all my windows.
“Now, what am I going to do?”
Luckily, I came up with a solution.  Fortunately, the frames I made had wide ends, so I was able to cut off 1/2 an inch off of each side of one to fit the window in the space.
Then I measured the third window, to my great dismay it was only 41 inches.  There was no way I could cut down my new windows to fit in that space.  It looks like I will only be replacing two vent windows this spring.
Of course, from past experience I should have known that nothing on our property is consistent and I should have measured every single window rather than assuming they were all the same.  I sure wasted a lot of time and money on an assumption.