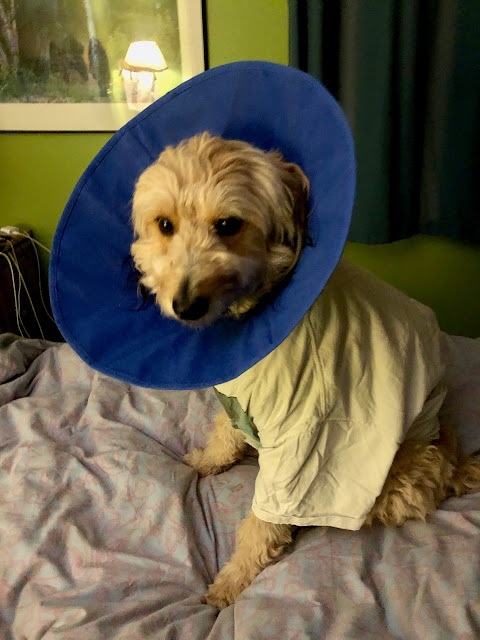 A few days ago when Kona and I were at the far end of the pond, two deer that were grazing on my neighbor’s lawn, bolted away when they heard us.  Kona, who thinks she is a mighty hunter, also bolted away after them, announcing her charge with a barrage of loud barking.  Trying to call her back was useless, so shaking my head, I walked back to the house.  Ten minutes later, Kona finally returned home.

A few hours after the incident we noticed a bit of blood on her chest, but it wasn’t very much, so we figured it was just a scratch.  As the day and the next passed, Kona kept licking the wound, so we we took a look and discovered it was a small gash about an inch long.  Fortunately it was not deep or bleeding, but  it was open to the point that we realized that it wouldn’t close by itself, so we realized that it would have to be stitched closed.

There isn’t a vet in town, but there is one 25 miles away, unfortunately he was away for two days, so we ended driving 2 hours to take Kona to the vet in Jasper, Al.

Kona got stitched up and we are babying her.  She seems a bit down about the experience, but I am sure she doesn’t realized that it was caused by her being wild.  I suspect that as she was tearing through the bush after the deer, they jumped a barbed wire fence, and Kona tried to run through it.