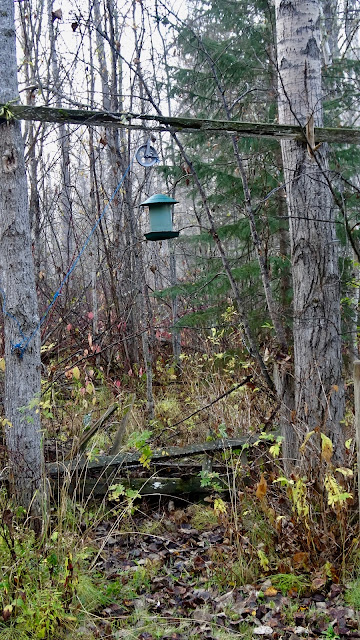 The photo above shows my bird feeder.  Two days ago I I saw a woodpecker looking around for my peanut butter bird feeder and so I put it, and the sunflower seed feeder, back up and filled them.  I take them both down over the summer because they attract bears; they also like sunflower seeds and peanut butter.

As I was putting the feeders up, it did feel like it was still a bit early, because the bears had not yet hibernated, but I figured the bears had already been through the yard several times, so probably figured that all the available food was gone.

Last night after coming home from our jam, I was met at the door by my wife who had Kona on the leash, ready for her final walk of the night.  I took the leash, grabbed a flashlight and Kona and I walked out of the carport toward the yard.  Kona immediately erupted into loud barking.  I tried to shut her up, but she ignored me and strained against the leash to get to whatever was out there.

Then I saw some white fur halfway up the tree on the right, and above it was a bear’s face.  (Our neighborhood bear does have a white patch on its chest.)

I pulled on Kona’s leash and forced her into the house.  As I did, I heard the cracking of wood and assumed that the bear had broken the cross-beam holding the bird feeder up, but I wasn’t going to investigate with the bear over there.

This morning when I got up and checked,I was surprised to find the bird feeder still there, looking exactly like it had yesterday.  I guess the cracking of wood I heard was the bear stepping on the wooded fence that lay on the ground.  The bear must have immediately climbed down the tree and taken off as soon as I turned to take Kona into the house, because there were still sunflower seeds in the feeder this morning and the birds were there eating them, so no harm was done by our night visitor. 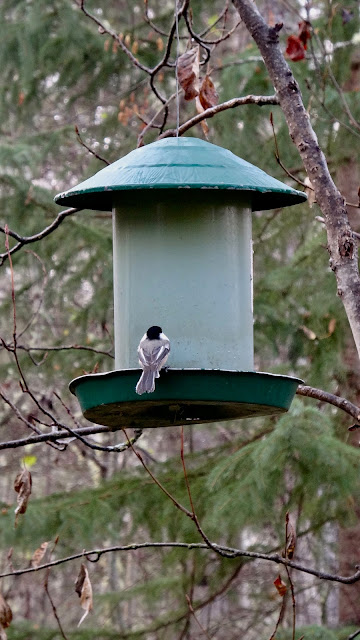 Look at my paintings:  davidmarchant2.ca
Posted by Life in BC's Robson Valley at 09:55