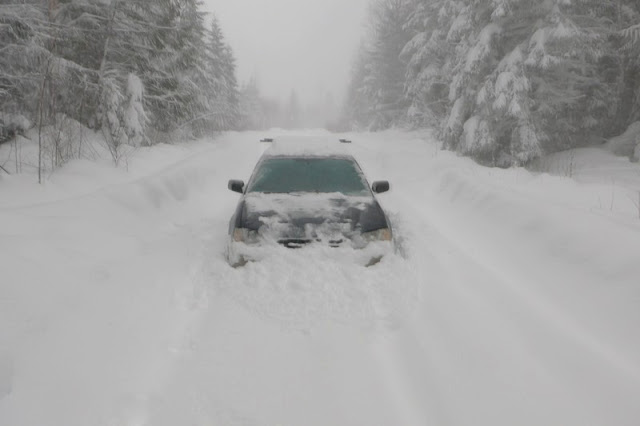 We have a friend who lives in a very isolated part of our already very isolated valley.  To get to his place he has to drive down a 1.7km (1 mile) road that trails off a long secondary road.  His road, which was pushed in many years ago does not have any legal status and is not owned by anyone, so it is not maintained by the government.  That means that during the winter. the two residents that live at the end of it, and use the road, have to see that it gets plowed if they want to go anywhere.  Unfortunately for our friend, the other party is not very neighborly or reliable about sharing the road plowing.
Our friend who is not presently working and doesn’t have a lot of extra money, but he has twice paid to get the road cleared of snow by a road grader.  A grader pushes the snow away off to the side of the road.  After this last big snowfall, the neighbor, who does own equipment, did clear the road with his backhoe.  Rather than pushing the snow way off to the side like the grader, he basically made a trench out of the road, enough for him to get out.  (Making such a trench will probably cause problems when the snow eventually starts to melt.)
The snow was still falling and fairly deep in the road, when our buddy headed home the other day, and his car got bogged down in the snow in one section section of the road (photo above).  When he got stuck he tried to open the car door and discovered that he couldn’t, because of the wall of snow close against the side of the car.
This could have been a real dilemma, but fortunately, he had his wits about him and figured out a solution:  He had a shovel in the car, so he lowered one of the windows, then using the shovel from the open window, he was eventually able to clear enough snow away from the door so he could open it.
Of course, that just got him out of the car, he still had to do a lot of shoveling all around and under the car before he could again start  to make his way home.  Luckily after a lot of shoveling, he did.
In telling the story our friend mentioned another potential problem that I hadn’t even considered.  If he was halfway down the road, and met another vehicle coming toward him, because the road is now so narrow, the only way to solve that problem is for one of them to back up all the way to the end of the road.  That would be a pretty long backup.
Living where we do does enable us to hear a lot of interesting stories about all the things people have to do, just to try to have a “normal” sort of life.
Below is a photo of his car after he had dug it out. 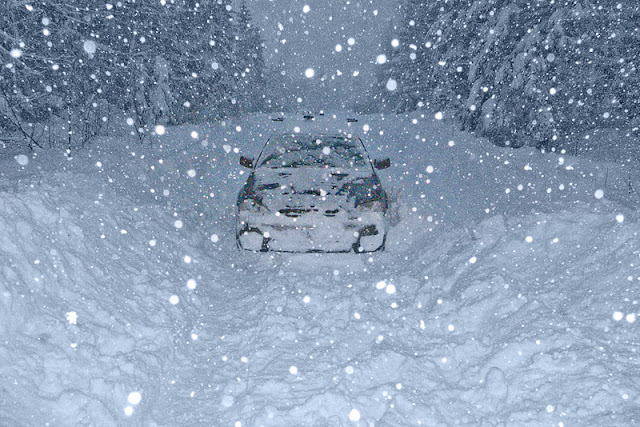