The Remains of a Day By Kazuo Ishiguro 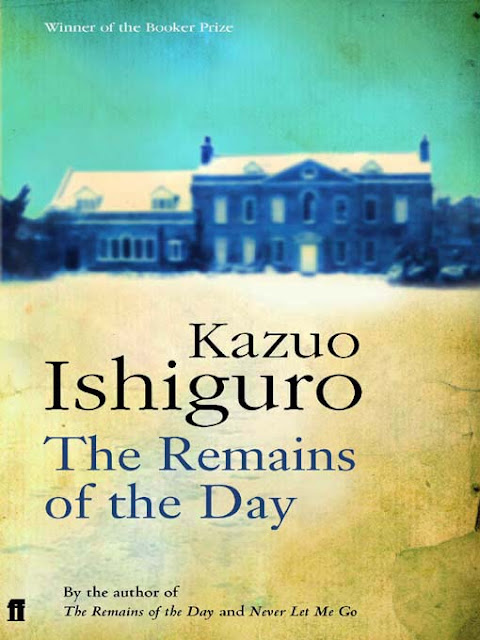 Today the McBride Library’s Book Club meets.  We were supposed to read books that took place in England.  One of the books I chose was The Remains of the Day by Kazuo  Ishiguro.   I was just in the middle of the book when it was announced that Ishiguro had won the Nobel Prize for literature.
This novel is about Stevens, an excellent butler from a long line of butlers, who is totally immersed in this trade and totally dedicated to his profession, during the decline of that profession as those big English houses began to fail economically.  In Steven's case in 1956, Darlington House was sold by Lord Darlington, Steven's previous employer, to a wealthy American and the house staff greatly reduced to just a few.  Those who remain were forced to take on the additional chores once done by other servants of the house.
Stevens is a very stiff, staid, overly proper, and overly-dignified individual, who would never consider "letting his hair down".   He is devoid of human emotions and his greatest enjoyment was discussing "best practices" of butlers with his few butler acquaintances.  His life is his job.
The story starts out with a dilemma for Stevens.  Farraday, the American owner is leaving Darlington House for a trip to the States, and offers Stevens the use of his car and encourages him to take a holiday while he is away.
Stevens, who hasn't left the the place for years at first rejects the idea, but after further pressure decides on a trip to visit Miss Kenton, a former favorite employee who recently sent him a letter reminiscing about her time spent working at Darlington House, which Stevens interprets as hinting at a desire to once again be employed there.  Stevens then is able to justify a road trip to himself because he would be doing business “for the house”, by possibly hiring a much needed staff person.
When she previously worked at Darlington House, Miss Kenton had made attempts to be friendly with Stevens and tried to tell him that his aging father, who was employed as a sub-butler was beginning to loose his abilities, but Stevens was so hard-wired into his butler job, that he took the information personally and chided her, as a butler would to an errant house staff person who over-stepped her role. She felt rebuffed and as a result their relationship had become strictly business-like with some underlying antagonism.
I assumed that the meeting of Miss Kenton and Stevens would be the big climatic event of the novel. Much of the storyline deals with his auto trip to see her.  He tells of his experiences as he travels across England to see her, but much of the plot is taken up with his remembrances of the past that slowly tell the reader what has happened in Darlington House.
The actual meeting was a rather underwhelming event, but it fills in the blanks of the story. If you like to read action-packed adventure stories this is not the book for you.  It is slow, but intriguing, and I really liked the way the story was written.
Because it was written in the first person, it is Steven's words and explanations that you read. It was written in such a way that you begin to doubt his narrative so you don't take his words literally, but instead read between the lines to construct what actually happened.   It is in your imagination that the actual tale is told, about the two wasted lives that were the result of Steven's total dedication to a job.  It was a great book.