Our jam session was asked to play for an hour during McBride’s recent Pioneer Days celebration.  It was a bit out of our comfort zone to be playing to the public, instead of just for ourselves, but it went well and it was gratifying so see that during a couple of songs members of the audience actually got up and danced.
Anyway, I wanted a photo of our big performance and remembered that local photographer Matthew Wheeler had done some video recording during the event, so I sent him an email and asked if he would send me some photos of our group playing.  This he generously did and when I looked at the photos I noticed that because we were so spread out across the front of the pavilion, to get all of us in the picture he had to take the shot from far away.  This didn’t make for a very good photo, and so I decided to do a little creative “photoshopping” of the picture.
I have used Photoshop for many years for my cartoons, so I knew how to use the basic tools in the software.  I set to work with the program to try and move members of our jam closer together, by cutting and pasting, adding and subtracting backgrounds and foregrounds in the photo.  Above you can see my photoshopped results.  Below is the original picture.
You hear a lot of negative comments in the media about “photoshopped” pictures, most of which refer to distorting the appearance of people, and while I did distort reality of the venue a bit, I didn’t change the people as they played, I just consolidated what was there by moving the people closer together.
I always find it interesting to compare the original photo to a photoshopped result and in this case it really changed the dynamics of a picture.   Just by changing the space between people, and cropping the shot to eliminate unnecessary background and foreground, the musicians become more of the focus of the shot, thus giving the photo more energy.  (There was plenty of energy during the performance, afterwards I was exhausted and came home and slept for an hour.)
Please note that we did have more than two in the audience, it was a big space and they just happened to be in the very front sitting on a picnic table, and so got included in the photo. 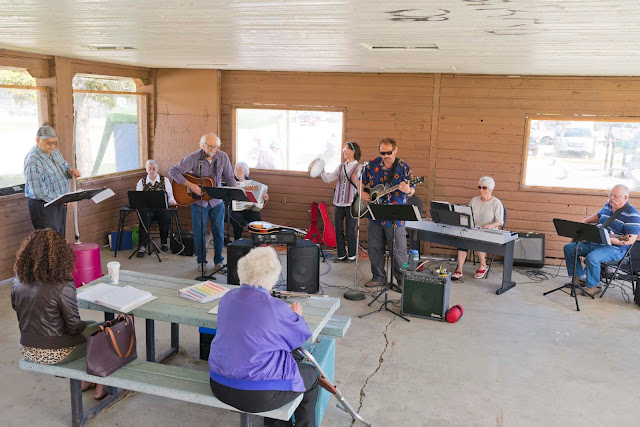