I Found A Hummingbird Nest, Sadly 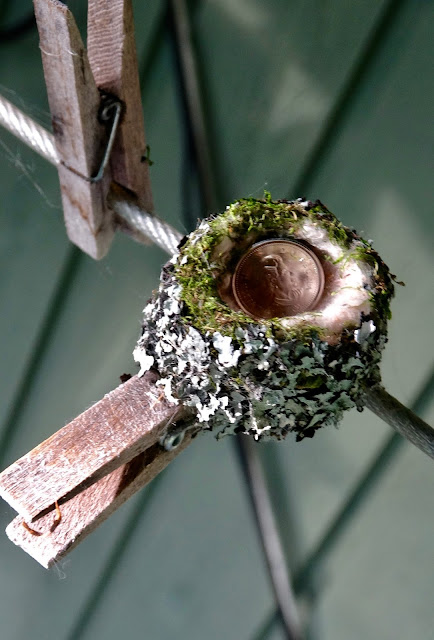 Hummingbirds breed in the Robson Valley, and I have seen the tiny nests that they build that other people have found.  I have always wished that I would find one, and yesterday I did, but it is a sad story.  I was going to hang some laundry outside to dry, and because it seemed that there might be a chance of showers, instead of hanging the clothes on our regular clothes line, I hung it on the covered line on our balcony.
I carried the wet clothes upstairs, and began hanging them starting on one end of the clothes line.  I was working my way to the other end, when I noticed that there was something attached to one of the clothes pins that we just keep clipped to the line.  Its grayish color made me think it was a wasp nest.  I went up to investigate and tipped the object sideways so that I could see what it was exactly.
As I did, something fell from the object at exactly the same time I realized it was a hummingbird nest.  The thing that fell was the tiny egg that it held.  The egg smashed on the floor of the balcony.  I felt awful and still do.  What an unfortunate accident, but the harm had been done and there was no way it could be undone.
I took a photo of the tiny nest, neatly made of lichen and moss, after putting a dime inside of it so you could get an idea of the size.
Wildlife is so important to me and I try so hard to help it along in this world seemingly bent on destroying it.  It is so disheartening whenever something like this inadvertently happens.