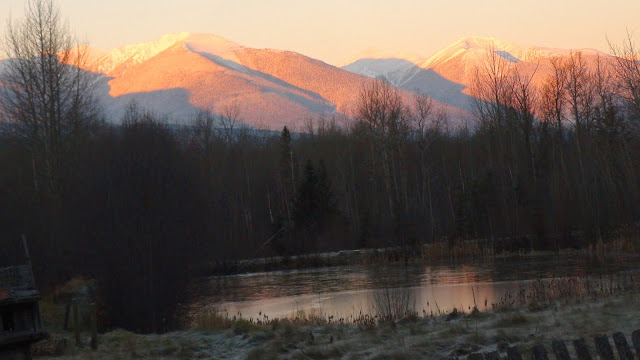 The overnight forecast called for -20C (-4F) but we were somewhat spared that indignity, and woke up to only -14C (+7F), but that’s cold enough for me.  The skies are clear and the pond is now covered with ice.
Yesterday, as we were getting to the cold temperatures, I was walking around the pond and on one of the frosty planks that I use to bridge a low spot, I discovered the frozen corpse of a frog.  I suspect that during the night as its body temperature and energy were rapidly dropping, it started across the board which was cold in itself, and by the time it got to the middle, the frog’s body totally shut down.  It’s corpse was totally intact and it didn’t seem to have any injuries except being frozen as stiff as a popsicle.
I remember reading that some amphibians can survive being frozen, so I picked it up and dropped it into part of the pond that hadn’t yet frozen.  It sank to the bottom and I don’t know if it will rejuvenate or not.  If it doesn’t I guess it will provide supper for some other critter in the pond.

Take a gander at my photo-realistic paintings:  www.davidmarchant.ca