Our Lone Chicken--Gone to a Better Place 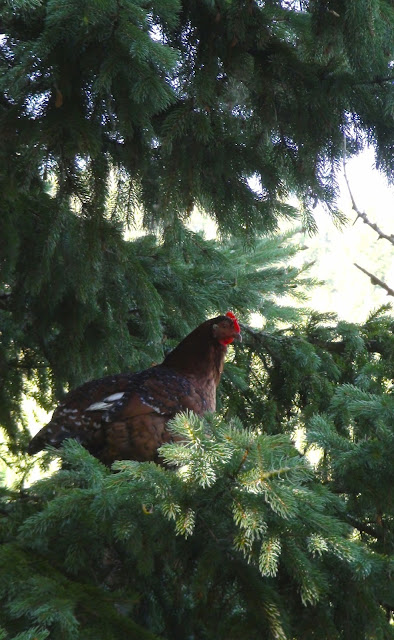 We have had chickens around our place for at least 10 years.  Lately it seemed that the Cosmos was letting us know that the time had come for us to turn that page.  This summer has been a bad one for our chickens.  The three we had at the beginning of the season, dropped to two under mysterious circumstances, then the number dropped again, leaving us with one lonely hen.
We got two new chickens, but I found one of those dead in the hen house a couple of days later.  (I’m pretty sure now that it had been killed by a weasel).  The chickens began laying their eggs in Mac’s old dog house.  Then those eggs started disappearing due to an influx of martens. After catching and relocating three martens, I figured things would get back to normal for our hens.
The two remaining chickens no longer went into the chicken house at night, preferring instead to roost in the spruce tree.  Then the other new chicken disappeared, and three days later I found its corpse in the woods.  (Another death via weasel).
As I recently blogged, we got 5 more chickens from our friend, Monica.  Then the other night a weasel killed three of them.  I knew then that it was crazy to continue with chickens.  I didn’t want to try to kill the weasel, and so I called Monica and she said she would take all of my remaining 3 chickens.
On Sunday night, I was able to corner one of them and get it into a box.  I was going to take it over to Monica’s Monday afternoon, and just as I was about to do that, my two escaped chickens wandered into the chicken run and I shut them in.  I managed to catch one of them, and put it into the box with the other one, but our original chicken flew from my hands, slammed into the gate, which opened, and it escaped into the yard.  I wasn’t sure when I would be able to catch it since it no longer trusted me.
I drove the two captured chickens to Monica’s and they rejoined life in their original home.  They probably thought their week living at my place was just a bad dream.
Yesterday when I came home from town, Joan told me that the neighbor’s pit bull along with two other dogs, came into our yard and chased our lone chicken, and she had wits enough to escape to the chicken house.  Joan shut her in.
The chicken was safe from the dogs, but not from me.  After a bout of chasing and frantic fluttering, I managed to grab her and put her into the box and I immediately drove her out to Monica’s farm, where she can live out the rest of her life with the other free ranging chickens, turkeys, and other fowl.  She has gone to a better place.