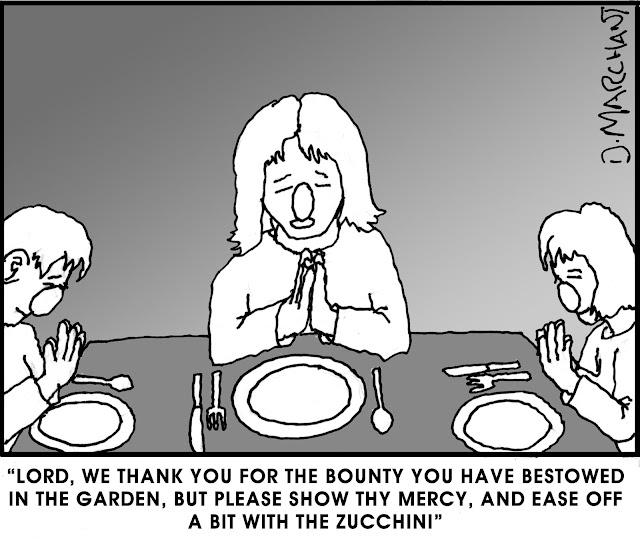 With a heavy heart, Joan led me over by the garden and pointed out two giant zucchini she had just discovered.  I merely gave out a sad sigh, and stoically excepted the fact that there was probably going to be more zucchini on my plate.  While it’s nice to have fresh veggies from the garden, when they suddenly appear in such great abundance, it becomes more of a burden than a gift.
Later in the day, we thought we might have come up with part of a solution to our problem.  We generally visit with Milne’s on Saturday night, and so when I called them, with hope in my heart, I asked Lyuba if they would like some zucchini.  She then told me that just that afternoon, Dave had discovered a giant zucchini hiding beneath one of their large zucchini plant leaves, and so they didn’t need any more.  When we arrived for our visit and I saw their zucchini, it was even larger than the one we were trying to get rid of.
Today, we have our two giants sitting out on the carport, waiting for us to deal with them.  Maybe, the bear will come by and help us out.
I draw a cartoon every week for our local paper;  above is one that I did a few weeks ago