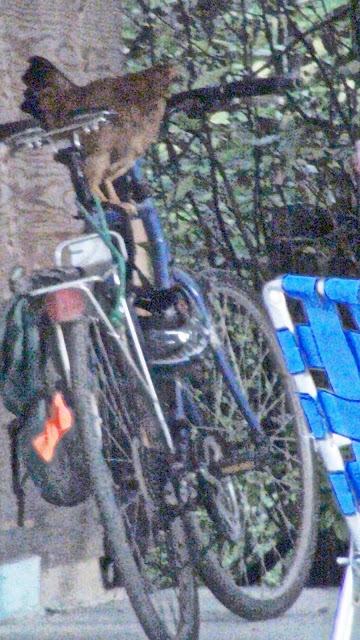 I have a fond memory about the time I had to replace the double glazed glass in our living room bay window.  It was not the fun or the excitement of doing the installation that made it memorable; it was the fact that everything worked.
The glass was the right size, it went in easily, and the framing all fit and I was able to quickly put it  into place.  It was an amazing event.  Life would be so nice if there wasn’t so many unexpected bumps in the road.
At present I find myself frustrated by two unrelated things:  Rescuing my remaining chickens and the new toilet we bought in July.
Since yesterday’s chicken massacre, I have been trying to catch the three survivors, so I can take them over to the safe haven at Monica’s.  I was able to conner and capture one of the chickens and kept it in a pet carrying case overnight, but the other two chickens are so skitterish that they won’t let me get close to them.  They don’t want to come close to the chicken house, which is the only place I can catch them.
Last night, Joan spotted the two fugitives roosting on the handlebars of my bicycle.  By the time I got out there one had disappeared and the other had jumped down to the cross bar.  As I approached, she also scurried into the bushes.

The frustration I am having with our new toilet is due to the fact that it is faulty and has been ever since I put it in.  It periodically either doesn’t turn itself off when the tank is filling with water and continues to run, or it decides to secretly drain the tank leaving it empty for the next flush.   Every time we flush we have to hang around until the tank fills to see if it turns off.  For a month now I have been hoping that it would correct itself.   I have taken the lid off hundreds of times and tinkered with the mechanisms in the tank, but to no avail.
I have finally had enough, so I guess it will mean taking the toilet out, driving it back 135 miles (217 km) back to Prince George and then getting a new one, driving it back to McBride, and installing it.
Some urban people dream about the simple life in the countryside, I often dream about the same thing.