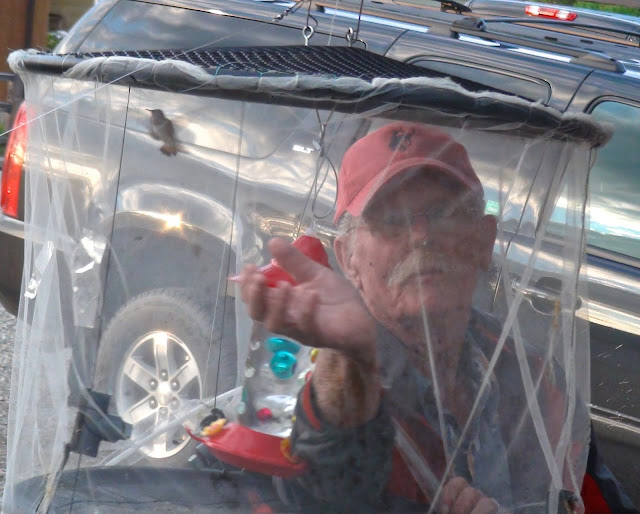 I was saddened a few days ago upon hearing that long time Dunster resident, Curtis Culp had died.  I had a lot of respect for Curtis, whose curiosity about hummingbirds motivated him to contribute to the knowledge of this amazing bird.

Curtis and his wife Bonnie moved to Dunster in 1972.  They became fascinated upon seeing a hummingbird buzz around their beautifully situated farm beside the Fraser River.  A few years later they bought themselves a hummingbird feeder and filled it with sugar water, which caused more and more hummers to buzz around their house.

Their curiosity caused Bonnie to write a letter to bird experts at Cornell University, and they received a nice letter back informing them that what little was known about the hummers came from an outdated study in 1932.  Somewhere down the line, Curtis found out about the bird banding that was being done by citizen scientists, causing him to inquire further.  He was taught how to catch and band hummingbirds and immediately, began banding the tiny critters himself.

The most common hummingbird in the Robson Valley is the Rufus Hummingbird that travel up here to mate and raise a family every summer.  It wasn’t known where they migrated to for the winter.  After several years of banding, Curtis was informed that one of his hummers was found in Texas, another in Alabama.  He submitted a hummingbird feather whose elements were analyzed which indicated the feather had trace elements found only in Southeastern Mexico.  So those tiny birds and their young families that we see in the Robson Valley every summer, fly over 4000 kms (2000 miles) every year to escape the winter.

I have a lot of admiration for Curtis, who could have just stuck to his farming activities, but instead chose to contribute to the research that increased Humankind’s knowledge of those miraculous little birds.