Look Whoo Was In The Bird Feeder 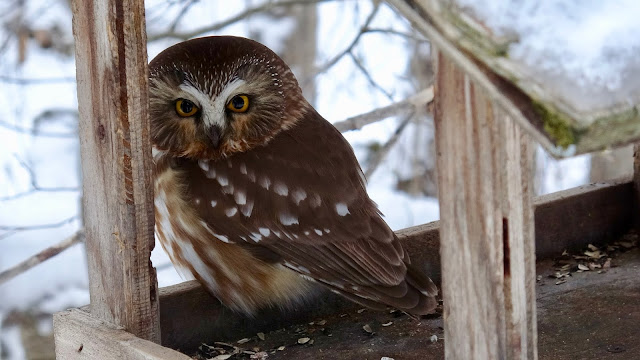 This morning when I walked out to the bird feeder, I noticed a brown mass silhouetted inside.  I assumed it was a squirrel, but it seemed a bit early in the morning for them to be there.  As I got closer I noticed it was an owl, a Northern Saw-Whet owl (Aegolius acadicus).  They are small little owls 7 to 9 inches (15cm to 22cm) tall, that live in dense coniferous or mixed forests.  They are not rare, but they are rarely seen.

I didn’t have my camera, so I went back inside the house to get it, hoping that it would still be there when I returned.  It was.  I took some photos, walked closer, took some more photos, walked even closer.  I wondered if it was sick, because it didn’t fly away.  I got closer yet, but it just sat there looking at me.  I got within arm length of the owl, but it just sat there.

Finally I reached out my hand toward it, and it did fly off into the woods.  When I got back into the house I grabbed my bird books to read about Saw-Whet Owls, and it seems that one of their characteristics is that they allow people to get really close and don’t panic.  Sometimes they allow people to pick them up.

Saw-Whets are strictly nocturnal and roost during the day.  I suspect that this one had decided to roost in my bird feeder, but the other birds wouldn’t have liked that.  Saw-Whets eat rodents and birds and I noticed in the photo below that it looks like there is a bit of blood on it’s bill.   Saw-Whets got their name from the sound they make, which sounds like someone sharpening a saw with a file. 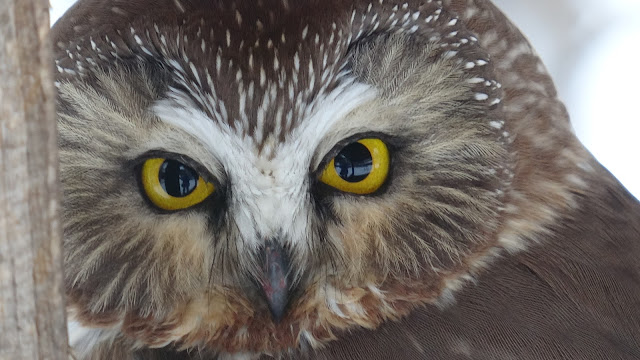 You can see my photo-realistic paintings at:  davidmarchant2.ca
Posted by Life in BC's Robson Valley at 11:10