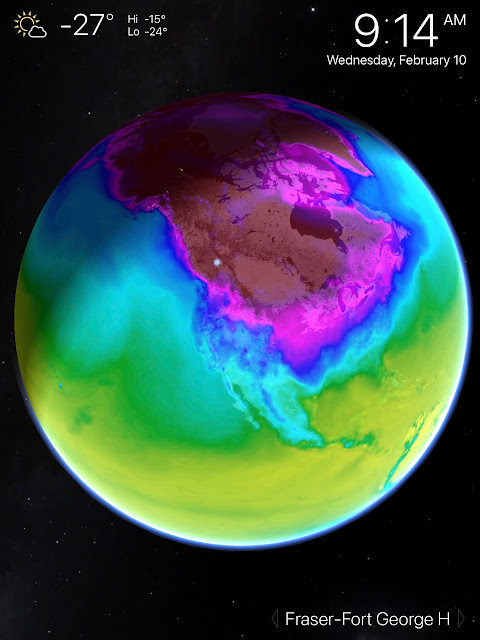 See the white dot in the screenshot above?  That is McBride.  See the ugly color that surrounds it?  That is the frigid Arctic air that has now engulfed us.  This morning our temperature was -34C (-29F), way too cold for my liking.

Whenever we get one of the Arctic blasts, my anxiety level really increases and I can’t help but feel very uneasy.  I get an underlying feeling that there are going to be problems.  The decades of living in the Interior of British Columbia have taught me that when it gets this cold, things usually go wrong:  the water might freeze up, the car might refuse to start;  something bad will happen.

True to those feelings, something has gone bad.  It is my car.

On the dashboard is a little image of a car that comes on to show that one of the doors isn’t totally closed.  That light came on the other day.  I opened and re-shut all of the doors and they all seemed shut, but the light remained on.  Then yesterday, in addition to that door warning light, the lights on the outside mirrors that illuminate to light the ground when you open the doors, went on and remained on as we drove.  They wouldn’t shut off, even when I turned the car off.

I realized that if they remained on all through the night, by the morning I would have a dead battery, so to prevent that, now every time we are done using the car, I have to disconnect the battery, then when I want to drive the car, I have to reconnect it.  It is a hassle and when it is this cold outside, it becomes a real pain to have to mess around with it.

The weather bureau forecast shows that tonight and tomorrow will be our coldest days, then it will slowly warm.  I hope so.

During a cold spell, it always makes me feel not quite so bad, to know that in other places (usually way up North or in the Canadian Prairies) things are worse.  I am hoping that this blog will have the same comforting effect to all of those people living where temperatures are not quite as cold as what we are having.

(Screenshot from the Living Earth app)